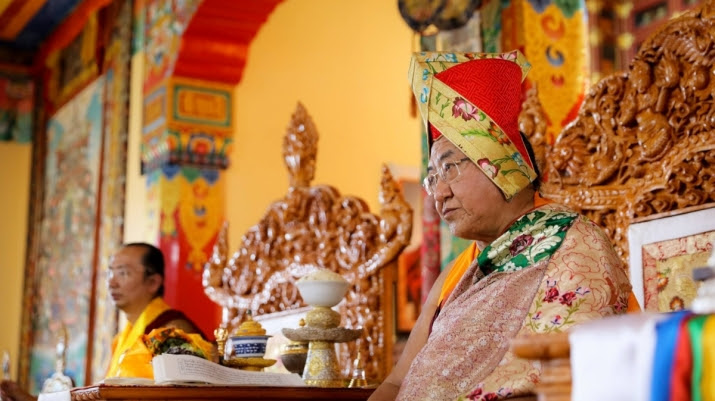 By Shyamal Sinha
The Sakya Tradition—one of the major Tibetan Buddhist traditions—was founded in 1073 by Khön Konchok Gyalpo, who established the first monastery as the seat of Sakya tradition, at a place called “Sakya” in the region of the Ponpo Ri mountain range. Subsequently, the five Founding Masters of Sakya initiated the common and uncommon teachings and caused the teachings of Sakya including the auxiliary sciences to flourish. Since then, the lineage and its followers have been called “Sakyapa”.

On the 9 March, the 42nd Sakya Trizin was enthroned at Sakya Institute Thubten Namgyal Ling in India. His Holiness Ratna Vajra Rinpoche is the eldest son of the His Holiness the 41st Sakya Trizin, and the first Sakya Trizin to be enthroned under the new succession system announced in May 2014. The enthronement ceremony was streamed live via Facebook.

The Sakya Trizin is the head of the Sakya School of Tibetan Buddhism, which was founded in 1073 by Khön Konchok Gyalpo, a member of the Tibetan noble family Khön, who established a monastery in the region of Sakya (present-day Shigatse Prefecture), Tibet. Leadership of the school has always remained in the Khön family, who are said to descend from Gods of the Realm of Clear Light that entered the human realm. Today, the Sakya School is one of four major schools of Tibetan Buddhism.

Traditionally, the office of Sakya Trizin or “Sakya Throne-holder” is held for life. Succession usually occurs after the death of the previous Sakya Trizin, and candidates for succession are drawn from the Khön family line. In 2014, however, a new system, proposed by the former Sakya Trizin and agreed upon by both the Phodrangs—the two palaces of the Sakya school; Dolma Phodrang and Phuntsok Phodrang—was adopted, with the agreement of His Holiness the 14th Dalai Lama. In its revised form, the tenure of the Sakya Trizin lasts only three years, with the possibility that an office holder may take office more than once in his lifetime. Qualifications for the position include: “the complete fulfillment of studies of all the basic courses of Rites and Rituals of the Sakya; studies in all the major philosophies; having received empowerments, reading transmissions, and pith instructions; having studies the teachings of the ancestral Dharma teachings of Lamdre Ts’ogshey and Lamdre Lobshey, along with other important teachings and empowerments; and having accomplished the basic recitation retreat on Hevajra and other important tutelary deities.” (Official website of His Holiness the Sakya Trizin)

Candidates for the position continue to be drawn from Khön family descendants, and future office holders are already in training. “The new system is based on the one used by the abbots of Ngor Monastery, which is a part of the Sakya school. The great master Dzongsar Khyentse Chökyi Lodrö [1893–1959] once suggested that the Sakya Trizins should follow Ngor’s approach, and now they will do that.” said Lama Migmar Tseten, Buddhist chaplain at Harvard University and founder of the Sakya Center in Cambridge, Massachusetts, in a 2015 interview. (Lion’s Roar)

His Holiness Ratna Vajra Rinpoche is the first to be enthroned under this new system, having met all the aforementioned requirements. Born on 19 November 1974, the 42-year-old Sakya Trizin is the 42nd in an unbroken lineage dating back to 1073. His Holiness has been educated in the Sakya school since birth by his father, the His Holiness the 41st Sakya Trizin, and many other lineage masters. In 1998, he completed a kachupa degree (equivalent to a bachelor’s degree in Buddhist philosophy), which he studied under Khenpo Ngawang Lekshey Kunga Rinpoche (also known as Khenpo Migmar Tsering, 1955–99). In addition, he has studied various esoteric and exoteric traditions and is, at present, considered one of most qualified masters in the Sakya school. In 2002, His Holiness Ratna Vajra Rinpoche married Her Eminence Dagmo Kalden Dunkyi, selected via the age-old Sakya tradition of holy divination. They have two daughters and a son.

In 2017, His Holiness will inherit the mantle of leadership from his esteemed father and Root Guru, in his new capacity as His Holiness the 42nd Sakya Trizin of the Sakya tradition of Tibetan Buddhism. In doing so, he will continue to guide and inspire Dharma students from all over the world with his wisdom, genuine qualities of unaffected simplicity, humility and complete honesty, by presenting the Buddha’s teachings in the most authentic way, while maintaining the purest of Buddhist traditions.