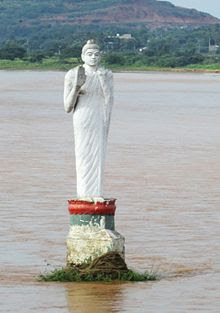 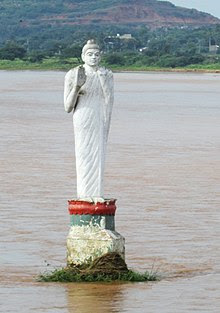 Srikakulam or Chicacole is of great historical significance in the medieval and later history of Kalinga. The earliest history of Srikakulam dates back to the ages of the Eastern Ganga Dynasty. It falls under the direct rule of the Suryavanshis of Nandapur until its annexation by the Golconda Qutb Shahis. Under the Sultans of Golconda, Srikakulam became the headquarters of the North Andhra region and one officer called ‘Fouzdar’ was appointed to look after the administration.
There are many other places of Buddhist Tourism such as Salihundam, Calinga Patnam, Dabbaka Vaani Peta, Nagari Peta, Jagati Metta, Singupuram etc. in Srikakulam District. The Buddhist heritage site of Salihundam has some unique features. It has a beautiful star atop a stupa, rock cut massive stupaas inside chaitya grihas, brick stupas with wheel pattern plan, votive stupas, inscriptions on the steps leading to the stupas and museum housing over two dozen sculpted statue and figurines of Buddha, Jain Teerthankars and other deities

Srikakulam district BJP president Attada Ravi Babji, senior leaders Pydi Venugopalam, Birlangi Umamaheswara Rao and others on Tuesday urged Union Minister for Tourism and Culture G. Kishan Reddy to develop a Buddhist circuit and establish a cultural museum in Srikakulam district. They met the Union Minister in Visakhapatnam and submitted a detailed memorandum explaining the tourism opportunities in the district.

Mr.Babji said that Srikakulam was known for Buddhist structures in Sarubujjili and Gara mandals and they can be developed on the lines of Thotlakonda and Bavikonda of Visakhapatnam district. Mr. Umamaheswara Rao said that many tourism spots could be developed all along the 180 km coast of the district. He said that 600 acres of huge tank in Siripuram village and Mahindra Giri Hills would be potential tourism hubs in the district. The party leader Pudi Tirupati Rao sought establishment of exclusive museum for tribal people in Sithampet since such museum in Araku was attracting hundreds of tourists. Mr. Kishan Reddy assured the delegation to look into the proposal and directed the officials to study the feasibility for extending Central government’s assistance in making Srikakulam as a tourist hub.