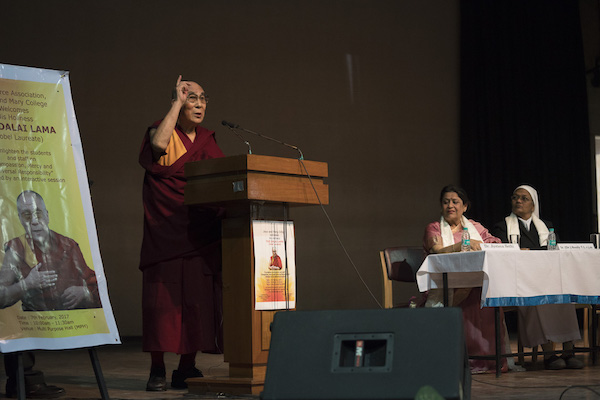 His Holiness the Dalai Lama emphasised  there was hope for change with united efforts.

“Today we are facing all sort of problems including global warming, scarcity of resources, retreating glaciers, increasing population and many more. Now the time has come to unite as human brothers and sisters and work towards the common goal: A happier world. Through education, we should promote sense of oneness of all human beings” His Holiness said, while addressing over 2000 students at Jesus & Mary College in New Delhi .

His Holiness expressed his admiration for the spirit of the European Union and said he looks forward to an Asian union and one on global level. “I think whole humanity should unite and create some kind of united world. One of my dream is China, India, Japan and all Asian countries create some kind of union.”

Creating a peaceful world order through dialogue, trust and sense of well being of entire humanity was was the heart of his talk .

The noble peace laureate said finding inner peace is the step towards bring the change in the world.

“Through praying, it seems we give the responsibility to God. But we should train ourselves, by training our mind in tackling the destructive emotions. Use your intelligence fully, it is the best gift of god. All these negative policies are due to our short sightedness. Whether in the field of global economy, or the case of global warming, there is no relevance of national boundary. Its imperative to think of one humanity,” he said.

His Holiness the Dalai Lama further spoke about his three main commitments in life, namely universal responsibility through promotion of human values; promotion of religious harmony; and the preservation of Tibet’s rich environment and cultural heritage.

He said his first commitment is on the basis of equality of all 7 billion human beings. “On the fundamental level, we are all same human being. Irrespective of whether we are believers or non-believers, we all pursue happiness and have the equal right to achieve happiness. It is scientifically proven that human’s basic nature is more compassionate. In terms of achieving both physical and mental happiness, we should practice love, compassion, forgiveness on the basis of oneness of humanity,” he stressed.

His Holiness said there’s too much discrimination based on color, nationality and religion. He further explained that all religions encourage love, compassion and forgiveness—not hatred and discrimination.

“All major world religions have the same potential to create good human beings. We practice different religions but our goal is same because all major religious traditions of the world emphasise love, compassion and affection. The philosophical differences are skillful means to benefit all people based on their mental dispositions,” he said, explaning his second commitment of promotion of religious harmony.

He said people who kill in the name of their faith are not truly religious. “Any one carrying violent action against others is no longer a practitioner of any religion.”

His Holiness said his final commitment is to work for the preservation of Tibet’s environment and its rich cultural and religious heritage including the Tibetan language. “In 2011, I relinquished all political responsibility to the people’s elected leadership. I have very proudly and happily ceased the centuries-old institution of Dalai Lama as temporal head of the Tibetan people. So now my service is towards preserving Tibetan knowledge, environment and language,” His Holiness said.

In response to a question on how to contain negative emotions, His Holiness said, “These negative emotions are part of us so its not easy to contain it. You need training of your mind. Here we see the need of hygiene of emotion. Anger and compassion cannot go together. Through training, the strength of compassion will increase. “

His Holiness also responded to a question from a teacher on controlling violence in class. “Teachers should develop close relation with young students. In order to develop that closeness, the teacher should show genuine sense of well being of the students. Educate them to become sensible human beings. Otherwise teachers, good scholars without showing human affection, not so helpful. There should be a compassionate atmosphere in the class room,” he answered.

Responding to a question on his secret for excellent health at such age, His Holiness said sound sleep and training of mind keeps him fresh through out the day. “I always sleep for nine hours. From about 6 in the evening, I sleep and I wake up at 3 am. After i wake up, I do analytical meditation, Virasana. Your mental hygiene is most important for physical fitness.”This  regularly exercise  keep him self motivated.