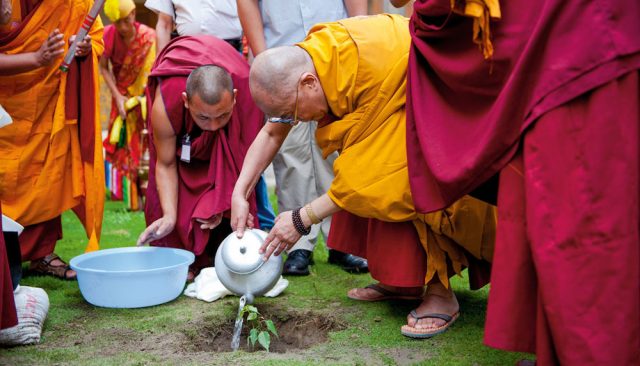 His Holiness the Dalai Lama has been invited to give the opening address of the two-day international Islam Buddhism Eco Dialogue (IBED), organized by Angkatan Belia Islam Malaysia (ABIM) from January 15-16. From his residence in Dharamshala, the 86-year-old leader will discuss the issues of climate change virtually, with other global intellectual figures, including Prof. Emeritus Datuk Dr. Osman Bakar, Dr. Reza Shah Kazemi, Ven. Prof. Dr. K.L Dhammajoti, and Ven. Dr. Bhikkhuni Dhammananda.

The interfaith event will feature intellectual personalities from Islam and Buddhist traditions to find solutions to the impacts of climate change as well as to create awareness among the global community. The Nobel laureate has been a vocal critics of human impact on climate change. He urged for unified global action from leaders during a virtual address at the G7 meeting and talked about ‘feedback loops’ with climate activist Greta Thunberg last year.

Buddhist and Islamic associations, including Tibetan Buddhist Cultural Center in Malaysia, University of Malaya, and International Students of Islamic Psychology, are collaborating this year to begin a conversation around the ways to tackle climate crisis collectively. ABIM president Muhammad Faisal Abdul Aziz said during the announcement that “major disasters occurring in recent times, including those currently faced by our country, are the impact of climate change happening around the world.”

The exiled Tibetan leader said in a video statement ahead of COP26 Glasgow event in Oct. last year, “At least in Asia, Tibet is the ultimate source of water. All major rivers from Pakistan’s Indus River, India’s Ganges and Brahmaputra rivers, China’s Yellow river, Vietnam’s Mekong River flow from Tibet.

Ten of Asia’s major rivers flow from the Tibetan Plateau and fill river basins that provide water to more than 1.35 billion people, a fifth of the world’s population. Demand for this water, propelled by population growth and rapid urbanization, is soaring while supply is under increasing pressure from accelerated melting of Himalayan glaciers and other factors. A water crisis looms. Overall, Asia has the world’s lowest per capita water availability and arable land, according to an Asia Development Bank report. Experts warn that the region needs to improve cooperation on water management soon or run the risk of conflict over water resources.

We should pay more attention to preservation of Tibet’s ecology. This is not only in the interest of 6 – 7 million Tibetans but the whole people in the area.” In April, he was one of the prominent Nobel laureates who released a signed letter ahead of the Leaders’ Climate Summit urging powerful countries to “keep fossil fuels in the ground”.

The Tibetan Plateau is home to the Himalayas, the world’s tallest mountain range. The Himalayas are at times referred to as the “third pole” because they hold the largest concentration of ice and glaciers outside the northern and southern poles. Glacier melt and mountain springs function as a water tower for billions of people. The waters originating from the plateau feed rivers flowing out of China across continental Asia. Scientists say the Himalayas also influence weather patterns, which help to predict rainfall and flood cycles.