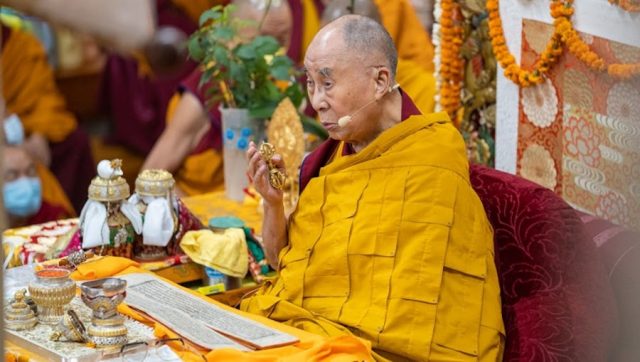 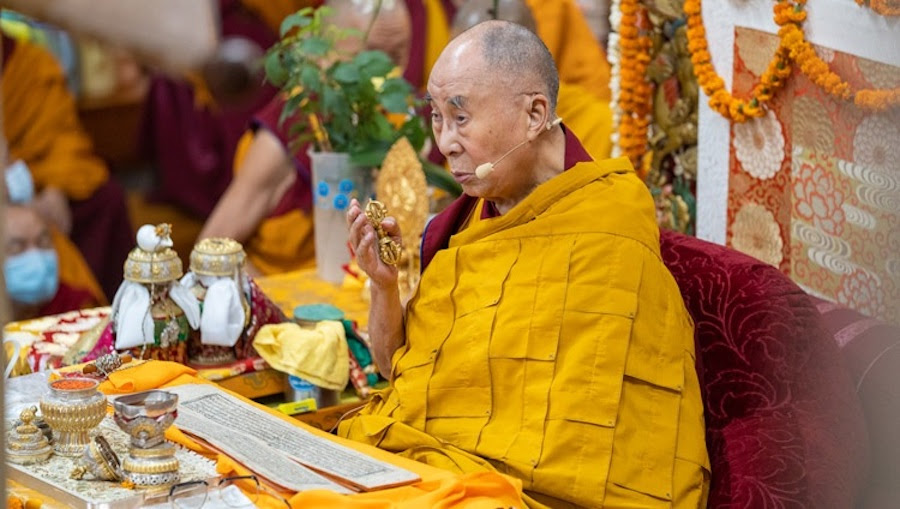 The Tibetan Spiritual leader on Tuesday concluded a two-day Avalokiteshvara empowerment to a group of devotees including Tibetans, Vietnamese, along with locals and tourists at Tsuglagkhang temple in McLeod Ganj. “The focus of my meditation is bodhichitta, and it brings me peace of mind. Bodhichitta is fundamental to my own feelings of joy as well as to the joy of others. Similarly, peace in the world will only come about when more people experience a peaceful, compassionate state of mind,” he told followers on the auspicious 15th day of Saga Dawa religious festival, an occasion to commemorate Buddha’s birth, his attainment of enlightenment, and his salvation from this samsara.

“The subtlest mind is known as the innate, spontaneously arisen mind of clear light which is the ultimate basis of the designation of a person,” the spiritual leader said, noting that the highest Yoga tantra is to be empty of any objective, independent existence in and of itself.

The Nobel laureate also reminded that Tibetans have had a special connection with Avalokiteshvara since the time of King Songtsen Gampo. His Holiness on Tuesday described how Songtsen Gampo chose to model Tibetan writing on the Indian Devanagari script. “A century later, when Shantarakshita was invited to Tibet, he recognised the potential of the language and strongly recommended that Buddhist literature be translated into Tibetan,” he further informed his followers.

The Dalai Lama noted that after coming into exile, Tibetans sought the help of the Indian government, led by former PM Pandit Nehru, to establish separate schools where Tibetans could study in their own language. The monasteries in South India were also re-established after the great learning centres in Tibet.

The empowerment was attended by at least 8,000 devotees, which was predominantly Tibetans, consisting of monks and nuns from various monasteries. It was at the request of Tai Situ Rinpoche that His Holiness gave the Chenrezig Gyalwa Gyatso (Avalokiteshvara Jinasagara) empowerment, which is one of the highest yoga tantra out of the four classes of tantra. At the end of the ceremony, members of the Palpung and Chango communities presented life-long offerings to His Holiness. On June 24, the Dalai Lama will attend a Long-Life prayer offered to him by Tibetan groups at the main temple in Dharamshala.

His Holiness led the congregation through the process of the All-encompassing Yoga. He urged them first to reflect on the awakening mind of bodhichitta and visualize the thought as a full moon disk at their hearts. Next he encouraged them to contemplate emptiness and to visualize that understanding as a white vajra standing on the moon disk. He stressed the need to cultivate these reflections on a daily basis. 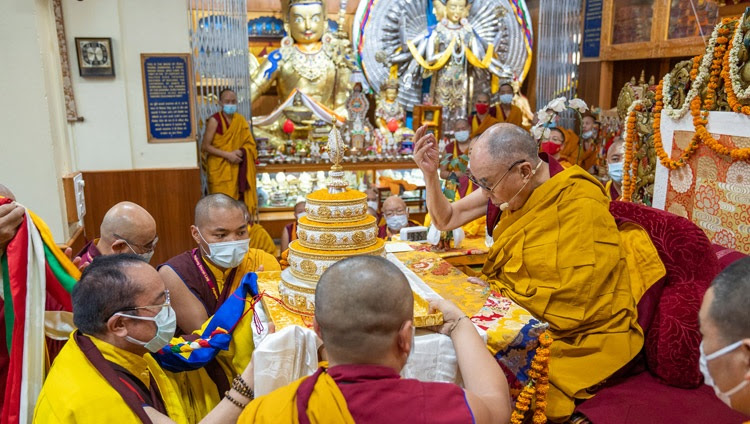 Tai Situ Rinpoche offering a mandala at the conclusion of the Avalokiteshvara Jinasagara Empowerment given by His Holiness the Dalai Lama at the Main Tibetan Temple in Dharamsala, HP, India on June 14, 2022. Photo by Tenzin ChoejorHe gave the Bodhisattva and Tantric vows and counselled keeping the practice secret.

As he came to the end of the empowerment, His Holiness emulated the Buddha in giving a prophecy of the enlightenment of those listening to him. With the granting of the uncommon Vajra Master empowerment, the four empowerments of Avalokiteshvara Jinasagara were complete.

Tai Situ Rinpoché had composed a prayer for His Holiness’s long life, copies of which were distributed amongst the crowd. As it was recited, members of the Palpung and Chango communities processed through the temple presenting offerings to His Holiness. He acknowledged them with a smile and a raised hand.

The entire ceremony was concluded with the chanting of the ‘Words of Truth’.