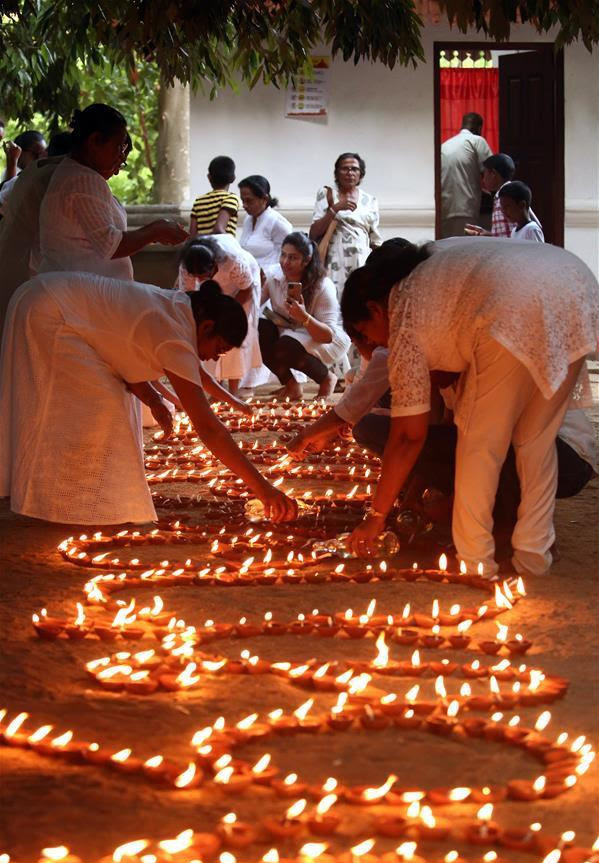 Local residents in Colombo hold a candlelight vigil of solidarity
with China’s efforts to battle the COVID-Outbreak.
Photo by Ajith Perera. From xinhua.net.com

The spread of Buddhism beyond India took root in its surrounding nations and Sri Lanka was one of the lucky ones. Buddhism in India eventually died out and Sri Lanka currently has one of the oldest living Buddhist traditions in the world. About 70% of the citizens of our island nation are Theravada Buddhists while there are about 6000 Buddhist monasteries in Sri Lanka with over 15000 monks who have devoted their life to serve and preach Buddha’s teachings.

Buddhists groups have led faith communities across Sri Lanka in a united show of solidarity with China as it races to stem the spread of the deadly novel coronavirus, now officially named COVID-19 by the World Health Organization, that has seen entire cities locked down as overstretched medical personnel fight to contain the outbreak.

On a mountainside near the ancient city of Kandy, Buddhists gathered at the Nelligala International Buddhist Center earlier this month to perform a pirith ceremony, the traditional practice of reciting scriptures as a protection against misfortune or peril.* The practitioners were invited by the Sri Lanka-China Buddhist Friendship Association (SLCBFA) to invoke blessings for the government and people of China.

“China at the moment needs support, that is why we decided to come here to invoke the blessings of Lord Buddha to give a speedy recovery to people affected by the novel coronavirus in China and the whole world,” said SLCBFA vice-president Ajith Dharmawardena. “I have confidence that the Chinese government and people will overcome this problem.” (XinhuaNews)

The ceremony was attended by some 1,000 people, including local residents and Chinese nationals living in Sri Lanka.

On the same day, a similar ceremony was organized by the Sri Lanka-China Journalist Forum (SLCJF) at the 19th century Buddhist temple Gangaramaya, in Sri Lanka’s commercial capital Colombo.

Buddhist monks at a pirith ceremony in Anuradhapura Vihara. From newsin.asia

At the time of writing, confirmed coronavirus infections in mainland China had reached 70,548, according to official data from the Chinese health authorities, with an official death toll of 1,770 people. The total number of confirmed cases in mainland China now far exceeds that of the 2002–03 SARS epidemic, which infected 5,328 people and killed 349 people, according to World Health Organization data. Global coronavirus infections are now reported to total 71,330, with five deaths so far confirmed outside of mainland China, compared with 8,273 SARS infections and 775 deaths worldwide in 2002–03. COVID-19 is believed to have originated in an illegal wildlife market in the central Chinese city of Wuhan, in China’s Hubei Province.

Sri Lanka reported its first and so far sole confirmed case of the coronavirus, a female tourist from mainland China, on 27 January.

The most recent pirith ceremony was held on Saturday, at the historic Abhayagiri Vihara in the ancient capital of Anuradhapura—where the renowned Chinese Buddhist monk and scholar Faxian (337–c.422) is said to have studied the Dharma some 1,600 years ago—as Buddhists gathered to invoke blessings for China and all those affected by the coronavirus. Leading the ceremony was chief monk Kalanchiye Rathnasiri Thero, who spent three years studying in Wuhan. Across Sri Lanka, a series of religious ceremonies for the Chinese people have been held in recent days by people of all faiths. Also on Saturday, at the more than 200-year-old St. Antony’s Shrine in the Colombo suburb of Kochchikade, Archbishop of Colombo Malcolm Ranjith led Sri Lankan Catholics in prayer for those affected by the coronavirus in China and around the world.

“The ailment that has struck China has affected the whole of humanity,” Cardinal Ranjith said in a sermon. “Pain caused to people in any country is a pain to us all because we are one human family.” (NewsIn Asia)

On Friday, in the 202-year-old Dewatagaha Mosque in Colombo, Muslims gathered for a special prayer session of solidarity for all those affected by the epidemic.

Mosque chairman Reyyaz Salley observed that this is a time for Sri Lankans to reciprocate China’s past support for their country: “People of all faiths and creeds in every country must join to solve this problem,” he said. “I hope and pray the virus will be defeated soon.” (NewsIn Asia) Sri Lanka is home to practitioners of a wide variety of religions. Theravada Buddhists account for the bulk of the island nation’s population at 70.1 per cent, according national census data from 2011. Of the remainder, Hindus make up 12.6 per cent, Muslims 9.7 per cent, Roman Catholics 6.2 per cent, and other spiritual traditions 1.4 per cent. As the official state religion, Buddhism is accorded special privileges in Sri Lanka’s constitution, which also stipulates freedom of religion and the right to equality for all of the country’s citizens.

When the British won control at the beginning of the 19th century Buddhism was well into decline, a situation that encouraged the English missionaries that then began to flood the island. But against all expectations the monastic and lay community brought about a major revival from about 1860 onwards, a movement that went hand in hand with growing nationalism.

Since then Buddhism has flourished and Sri Lankan monks and expatriate lay people have been prominent in spreading Theravada Buddhism in Asia, the West and even in Africa.