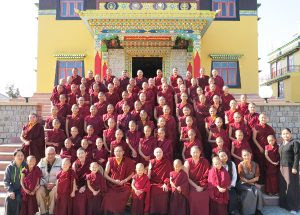 The Khampagar Monastery therein, is the primary school for Tibetan teachings and practices. The Indian gaddi tribal people also live in this area along with Tibetan people.

There are 100 nuns currently living, studying and practising at Dongyu Gatsal Ling. They ar

These nuns range in age from children to mature women. Most have had schooling but occasionally some have received no education at all. The DGL Nuns initially enter a demanding six year programme and their achievements are a credit to their commitment and hard work.

A while ago we received a group of young girls from various remote Himalayan regions who came to us to be trained as nuns. Since they had received no previous schooling, we engaged teachers specifically to instruct them in basic subjects such as maths, English, general knowledge and so on, along with an emphasis on reading and writing Tibetan. All these young nuns are now fluent in the Tibetan language and have settled down happily in their new lives.

The nuns’ daily life is varied and full, starting with Tara puja and meditation in the early morn

ing. They can choose to do either silent sitting or walking meditation.

In the evening is a Mahakala puja and Chöd ritual, during which the nuns play ritual instruments such as the damaru (a hand-drum).

There are also four longer ceremonies performed each month, according to the Lunar calendar.

During the day, the nuns schedule is filled with classes, debating and revision.

Intensive Tibetan language courses in reading, writing, comprehension and speaking are the m

ain focus of the first year, along with memorising prayers. The acquisition of this language is vital, particularly for non-Tibetan speakers, enabling the nuns to fully participate in their philosophical education.

Gradually teaching was also undertaken by well-qualified Nuns from other nunneries, and a wonderful recent development is the graduation of our most senior female teacher, Tenzin Kunsel, to the Geshe degree. You can read more about Geshe-ma Tenzin Kunsel’s graduation here.

Our teaching faculty is further enhanced by an additional senior nun from Namdroling, Nyingma Nunnery, several of DGLs own senior nuns, and a lay teacher who provides elementary education to the younger nuns.

The nuns practice debating everyday and once a year attend the Kagyu Monlam in Bodhgaya to have the opportunity to debate with nuns from other nunneries. Debating provides a valuable opportunity to consolidate and deepen understanding of the texts studied and is a powerful means to strengthen the nuns’ self-confidence.

At the completion of the first six year philosophical study programme, the nuns may choose to undertake retreat. We now have eight nuns in long-term retreat, some of whom some have completed nearly nine years. The aspiration of these nuns is to become Togdenma or realised yoginis. Other nuns may choose to continue their further education. It is hoped that in the future some of the nuns undertaking higher philosophical studies will become Khenmos (fully qualified philosophy teachers).

Later some of these fully trained nuns may return to their own remote regions to establish well-run nunneries. They can become Dharma teachers and contribute to their community with the life skills they have learned at DGL.

Proficiency in English will enable the nuns to function in the modern world and also to communicate with the many foreign visitors to the nunnery. In the future some will be involved in office management and maintaining the international sponsorship program.

Jetsunma teaches the nuns once a week when she is residence at Dongyu Gatsal Ling, usually making commentary on texts such as The Hundred Verses of Advice of Padampa Sangye.

Ritual chanting, playing of traditional ceremonial instruments and torma-making (ritual offerings) classes were taught by senior monks from Khampagar Monastery for many years. As a result our senior nuns are now very proficient and teach the junior nuns themselves.

International Women’s Day is a time to reflect on progress made, to call for change and to celebrate acts of courage and determination by ordinary women who have played an extraordinary role in the history of their countries and communities.