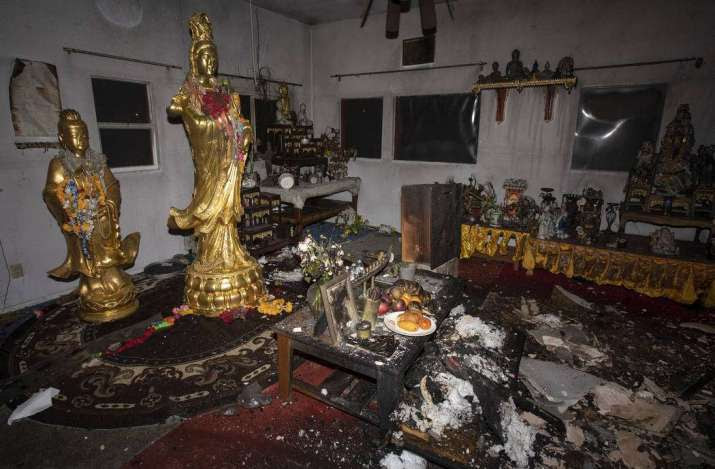 The shrine at the Buddhist temple in North Las Vegas. From reviewjournal.com

A Thai Buddhist temple in the city of North Las Vegas was the scene of a suspect arson attempt and shooting on Sunday. No casualities were reported in the incident, which police are treating as a possible hate crime, although the gunman was subsequently found dead later on Sunday.

Six residents inside the Thai-Buddhist Temple-Las Vegas, also known as Wat Buddha Pavana, reported that they smelled smoke at around 8 p.m. on 15 December. As they attempted to extinguish the fire, a man appeared and yelled: “I hate you,” before firing gun shots. (KNTV) The suspect then fled and was later found dead in a nearby backyard. He had shot and killed himself, according to Las Vegas Police, who have not released the identity of the suspect.

None of the people present at the temple were hit by the gunfire and all were able to escape the flames unharmed. The suspect is believed to be connected with another fire started in the area on the same evening. A police spokesperson said it was too early to say whether the fire and shooting were a terrorist act. Agents from the FBI and the Federal Bureau of Alcohol, Tobacco, Firearms and Explosives (ATF) are reported to be investigating the incident.

“That’s something we look at any time there’s an incident in a religious building,” said Las Vegas police officer Eric Leavitt. (Associated Press)

According to FBI statistics, there were 4,571 reported hate crimes in the United States in 2018, many of them in large cities, involving victims from a wide range of ethnic and religious backgrounds. However, Buddhists are rarely the targets of such attacks.

According to the FBI, North Las Vegas police are heading the investigation. An outdoor shrine was badly damaged at the Thai temple, but fire crews were able to douse flames inside the temple doorway before the fire spread inside. A view of the fire damage to the temple. From 8newsnow.com

Wat Buddha Pavana, founded in 1992, is located in a residential area about 15 kilometers north of the Las Vegas Strip. The temple is home to a small group of Thai monastics and mostly draws membership from the area’s Thai community, although it welcomes people of all backgrounds and beliefs. It is open to the public from 9 a.m. to 6 p.m. daily and offers chanting from 4–5 p.m. daily, during which guests can read from a book of Buddhist chants, written in both Thai and English.

“Anyone can meditate,” said meditation teacher Arunee Price at the temple. “After meditation, [you can] pray to Buddha and God, or pray for whoever you believe in . . . you can believe in the sky.” Price, who goes by the nickname Annie, has been attending the temple for several years. (Las Vegas Review-Journal) Meditation teacher Arunee Price sitting in front of Buddhist iconography at the temple in 2017. From reviewjournal.com