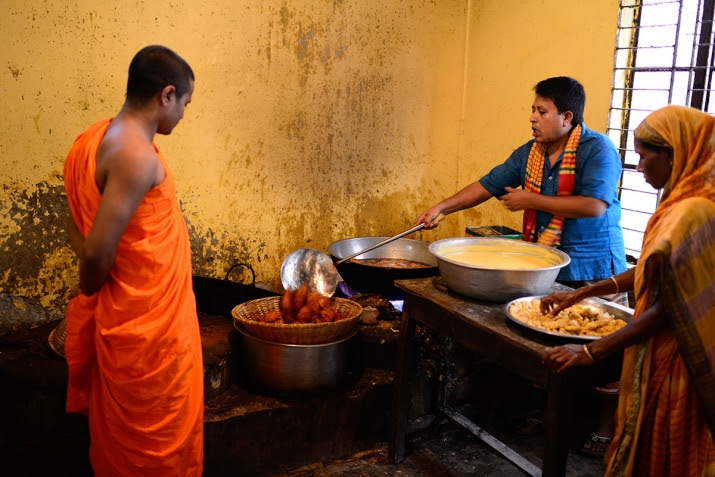 Buddhapriya Mahathero, the second most senior monastic at the monastery, hands out iftar. He has previously said that he does not support the persecution of Muslims in neighboring Myanmar. Photo by Mahmud Hossain Opu. From aljazeera.comIftar is one of the religious observances of Ramadan and is often done as a community, with people gathering to break their fast together. Iftar is taken right after Maghrib time, which is around sunset.
In Bangladesh, a wide variety of foods is prepared to break the fast at Maghrib time. Some of the common iftar items from Bangladeshi cuisine include Piyajoo (made of lentils paste, chopped onions, green chilies, like falafel), Beguni (made of thin slices of eggplant dipped in a thin batter of gram flour), Jilapi, Muri ( puffed rice similar to Rice krispies), yellow lentil grains, usually soaked in water and spiced with onion, garlic, chilli and other iftar items), Halim, dates, samosas, Dal Puri (a type of lentil based savoury pastry), Chola (cooked chickpeas), fish kabab, mughlai paratha (stuffed porota with minced meat and spices), pitha, traditional Bengali sweets and different types of fruits such as watermelon.

Despite long-standing tensions between Buddhist and Muslim communities in many parts of Bangladesh, Dharmarajika Monastery, a Buddhist temple in the capital Dhaka, has since 2013 been serving iftar—the evening meal with which Muslims break their fast during Ramadan—to underpriviliged Muslims in the local community.

Iftar, also known as fatoor, is taken at sunset during the month-long religious festival. Prepared during the day in homes, restaurants, and at roadside stalls, breaking the fast with iftar is a social affair and many families choose to share the meal at their homes. Mosques and religious groups also organize iftar buffets, but these are often only accessible to men. Fasting during Ramadan is a tradition upheld by Muslims the world over to commemorate the first revelation of the Quran to Muhammad. Ramadan traditionally takes place during the ninth month of the Islamic calendar. This year, Ramadan started on 26 May and will end on the evening of 24 June with Eid-ul-Fitr, the festival of breaking the fast.

Ever since starting the iftar initiative, Dharmarajika Monastery has been handing out food to hundreds of poor and deprived Muslims during Ramadan. People start lining up in the afternoon, before the food is distributed from 5.30pm. The meal is served in a box, and consists of beguni(eggplant tempura), chhola-boot (lentils), khejur (dates), muri (puffed rice), potato chips, peyaju(onion tempura), and jilapi (a sweet made with sugar syrup). The initiative is an example of social harmony between two religious groups in a country that too often witnesses religious intolerance and deadly attacks against minorities, examples of which include death threats against the abbot of Dharmarajika Monastery and the recent torching of homes of indigenous Buddhist communities in the Chittagong Hill Tracts by Bengali Muslim Settlers.*

“Actually, we do it from the very perspective of communal harmony and humanity,” said Venerable Buddhapriya Mahathero, the second most senior monastic at the monastery. “We want to help the poor anyhow, and offering iftar is one of the ways.” (The Daily Star Online)

His Holiness Venerable Suddhananda Mahathero, the abbot of Dharmarajika Monastery and supreme patriarch of the Supreme Sangha Council of Bangladesh (Bangladesh Bauddha Bhikkhu Mahasabha) came up with the initiative. Despite the attacks and ill-treatment of Buddhist minorities by the Muslim majority, Venerable Suddhananda remains determined to respect all religions and mankind: “We become happy when we can serve people.” (The Daily Star Online)

“Buddhism taught us that serving humanity is the ultimate religion. We are feeding poor Muslims who cannot afford to buy proper meals to break their fast,” said Venerable Suddhananda. (Dawn)

Drinks such as lemon shorbot and yoghurt sharbat(made of yoghurt, water, sugar and rooh afza) are common on iftar tables across the country. People like to have iftar at home with all family members and iftar parties are also arranged by mosques. According to the prophet Muhammed, you should first break your fast with something sweet or with a prayer. Many break their fasts in Bangladesh by eating a kajur or a date and by saying one of the surahs in the Qur’an. Men and women stand in separate queues to collect the food boxes. Photo by Mahmud Hossain Opu. From aljazeera.com

Professor Mohammad Aktaruzzaman, who teaches Islamic History at the University of Dhaka, commented, “It is a very good initiative as this will strengthen the religious harmony in Bangladesh. They [Buddhists] showed respect to another religion. They proved that humanity is above all. This is the spirit of religion that all should follow. They are not only distributing food among poor people, rather they are preaching the message of peace and peaceful co-existence between religions.”  (China.org.cn)

Many Muslims have praised the initiative on social media and thanked the monastery for their iftardistribution. “I don’t know why, but I’m almost in tears. It’s almost hard to believe that humanity still exists, but again such actions and activities in the society always give me hope toward a better future. In Shaa Allah!,” commented Dhaka Tribune reader Aysha Zaheen.