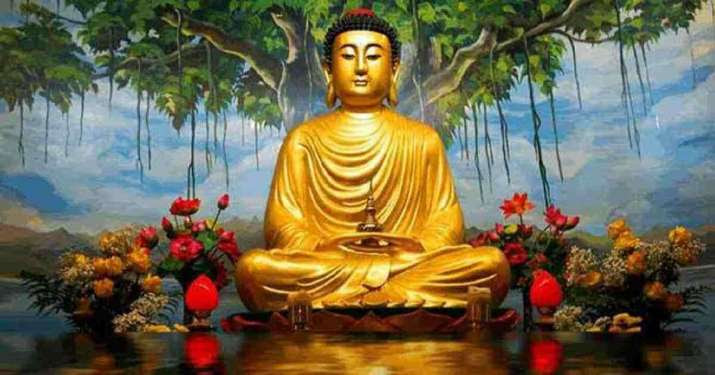 From unb.com.bd
On Vesak Day, Buddhists all over the world commemorate events of significance to Buddhists of all traditions: The birth, enlightenment and the passing away of Gautama Buddha. As Buddhism spread from India it was assimilated into many foreign cultures, and consequently Vesak is celebrated in many different ways all over the world. In India, Vaishakh Purnima day is also known as Buddha Jayanti day and has been traditionally accepted as Buddha’s birth day.

In 2000, the United Nations resolved to internationally observe the day of Vesak at its headquarters and offices.

The name of the observance is derived from the Pali term vesākha or Sanskrit vaiśākha, which is the name of the lunar month used in ancient India falling in April–May.

As Buddhists around the world prepare to mark Vesak and commemorate the birth, enlightenment, and death of the Buddha. Millions of Buddhists, many living under lockdown or subject to strict social-distancing rules due to the COVID-19 pandemic, will be marking the sacred day at home or connecting with their communites digtally, by joining online observances of Buddhism’s most auspicious holiday.

In many countries and regions, Buddhist practitioners have been urged to focus and reflect on the internal aspects of the celebration rather than attending traditional public festivities as the world struggles to battle the growing coronavirus pandemic that has wrought havoc on billions of lives, destroyed livelihoods, and stalled national economies.

Vesak, also known as Buddha Purnima (or more informally Buddha’s Birthday), commemorates three key events in the life of the historical Buddha, Shakyamuni, that represent the birth of Buddhism: his birth, enlightenment (Skt: sopadhishesa-nirvana), and passing from this world (Skt: mahaparinirvana). The occasion is a public holiday in many countries in Asia and is celebrated by millions of Buddhists across the world. Although the date of the holiday can vary from country to country, it is traditionally observed on or around the date of the full moon in the month of May.

In a public message to the Buddhist world, UN Secretary-General António Guterres’, who in March issued an urgent call for a ceasefire on all armed conflicts around the world in light of the pandemic,* offered the following message for the international Buddhist community for the Day of Vesak on 7 May, calling on all nations to celebrate the Buddha’s teaching by acting with compassion and solidarity, and by renewing our commitment to build a peaceful world:

I send warm wishes to all celebrating the Day of Vesak, a sacred occasion to millions of Buddhists around the world.

As we honour the birth, enlightenment and passing of Lord Buddha, we can all be inspired by his teachings.

And as the human family suffers the impacts of the COVID-19 pandemic, we are reminded of the sutra: “Because all living beings are subject to illness, I am ill as well.”

This timeless message of unity and service to others is more important than ever. It is only together that we will stop the spread of the coronavirus and recover.

On the Day of Vesak, let us celebrate Lord Buddha’s wisdom by taking action for others with compassion and solidarity, and by renewing our commitment to build a peaceful world. The UN General Assembly first officially recognized Vesak as an international observance in 1999 and the first celebration was held at the UN headquarters in 2000. In light of the rapidly evolving COVID-19 pandemic situation, the International Council for the Day of Vesak (ICDV) decided in early March to cancel the upcoming 17th United Nations Day of Vesak event, which was scheduled to be held in Thailand.**

The Taiwan-based Tzu Chi Foundation, an international humanitarian organization established in 1966 by the Buddhist nun, teacher, and philanthropist Cheng Yen, has launched a web portal for Buddhists to perform the Vesak ritual of bathing the Buddha from their homes with a livestream from Taiwan. The Online Buddha Bathing site went live on 1 May, the Buddhist relief organization announced.

Participants who join the online offering are provided with a step-by-step guide of the virtual ceremony, encompassing Verses of Praise of the Buddha, bathing the Buddha ritual and prayers, and Verses of Transference. “Having a Buddha-bathing ceremony at home can be done in a simpler manner. What matters the most is to understand the meaning of the ritual and piously contemplate the purest of thought,” the Tzu Chi Foundation said. “The celebration of the Buddha Day is not only a commemoration of the Buddha’s teaching, it is also a reminder to us to return to our innate Buddha nature.” (Malay Mail)

Many Buddhist families in Sri Lanka will be staying home to celebrate with immediate family members on 7–8 May. Buddhist monks have been urged to avoid holding public gatherings, and in turn have been advising followers to make traditional lanterns in their homes using sustainable materials. Sri Lankan Christians were also reported to be decorating their churches and homes with Buddhist lanterns and flags in a show of interfaith solidarity. Buddhists in Bangladesh received similar advice to avoid mass gatherings as President Abdul Hamid and Prime Minister Sheikh Hasina issued messages of greeting to the nation’s Buddhist community for Vesak. “I urge all of the Buddhist community to celebrate their festival while staying at their respective homes,” President Hamid’s message said. (Dhaka Tribune)

The Malaysian Buddhist Association (MBA) has prepared a series of online programs to help Buddhists celebrate Vesak in their homes, following the cancellation of traditional celebrations. The MBA’s honorary secretary, Rev. Ji Zun, said a ceremonial bathing of a Buddha image and chanting would be live-streamed on the MBA’s Facebook page, with an assortment of live interviews to be shared online over the course of the celebrations. “Although the public is not able to go to temples to bathe the Buddha statue, they can still participate online in these auspicious activities at home through the YouTube video,” she said. “We hope that through the program, devotees will enrich their innermost being to understand and nurture reverence to Buddha, Dharma, and Sangha during the movement control order (MCO).” (The Star)

In Vietnam, the Vietnam News Agency announced that Vesak celebrations—to be hosted at the headquarters of the Vietnam Buddhist Sangha (VBS)’s Central Committee—would be broadcast live on Youtube, Facebook, Butta and Phatsuonline, and An Vien TV. Monasteries and other Buddhist institutions have been advised not to hold rituals, parades, or other public events for more than 20 people.

Likewise, Buddhist monks in Thailand will still perform traditional Vesak rituals at their temples, but they will have to follow physical distancing rules while doing so. Lay Buddhists have been recommended to stay home and show their gratitude to the Buddha by observing the five precepts, practicing meditation, chanting, and listening to online sermons. From thehindu.com
On Vesak, devout Buddhists and followers alike assemble in their various temples before dawn for the ceremonial and honorable hoisting of the Buddhist flag and the singing of hymns in praise of the holy triple gem: The Buddha, The Dharma (his teachings), and The Sangha (his disciples). Devotees may bring simple offerings of flowers, candles and joss-sticks to lay at the feet of their teacher Celebrating Vesak also means making special efforts to bring happiness to the unfortunate like the aged, the handicapped, and the sick. To this day, Buddhists will distribute gifts in the form of cash, or volunteering in various charitable homes throughout the country.
The Day of Vesak is an official holiday for the UN offices in many of the countries in South-East Asia.
Share this...