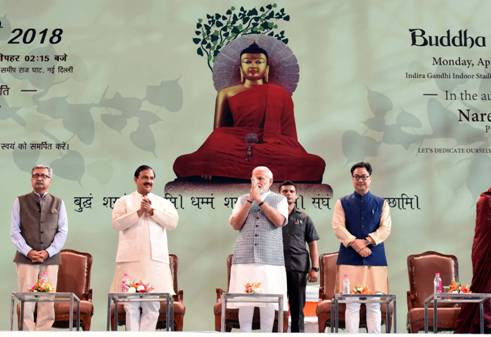 On the occasion of Buddha Jayanti Shri Narendra Modi joined the celebrations Organised by the Ministry of Culture, Government of India and the International Buddhist Confederation (IBC), the celebrations were attended by the Minister of State for Culture (I/C), Dr. Mahesh Sharma, the Minister of State for Home Affairs, Shri Kiren Rijiju , Ven Dr. Dhammapiya, Secretary General, International Buddhist Confederation (IBC) ; Buddhist monks and Buddhist representatives from various countries including Sri Lanka, Vietnam, Thailand as well as India among others.

The Prime Minister offered Sangh Dana and offered his respect to the sacred Holy Relics brought specially for the occasion from National Museum He also presented the Vaishakh Sammaan Prashasti Patra to the Central Institute of Higher Tibetan Studies, Sarnath; and the All India Bhikshu Sangha, Bodh Gaya in today’s function. Addressing the gathering, the Prime Minister asserted that India is home to a unique heritage, where the overriding thought has always been the benefit of mankind. He said that the teachings of Lord Buddha have shaped many nations. He said India has never been an aggressor.

Shri Narendra Modi said that the Government is working with compassion to serve people, in line with the path shown by Lord Buddha. He also said that the Union Government is working with an elaborate vision, to preserve the cultural heritage of India, which includes the heritage associated with Lord Buddha. He said a sum of Rs. 360 crores has been approved for the development of Buddhist Circuit.

Speaking on the occasion, the Minister of State for Culture (I/C), Dr. Mahesh Sharma said, ‘Our Hon’ble Prime Minister- as an ambassador of Buddha’s noble philosophy of Compassion, Humanity and Love- has been successfully taking these to the countries across the world which he has been visiting. Lord Buddha not just preached but also practised what he preached. He provided human beings the vision of Humanity and Compassion which when practised can make this world a better place to live in.’ Dr Mahesh Sharma said that India is the land of Buddha and 7 out of 8 prominent sites of Buddhist pilgrimage are located in India. Highlighting the message of peace given by Lord Buddha, the Culture Minister said that we believe in Buddha and not Yuddha(War). 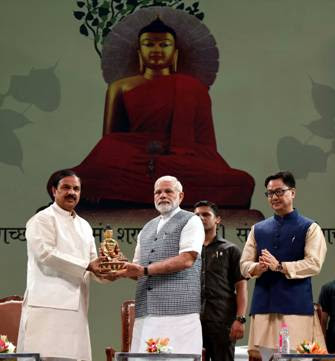 Present on the occasion, Minister of State for Home Affairs, Kiren Rijiju, said

“It is the current Government which has made the celebrations of Buddha Jayanti an official event and is being celebrated with such grandeur.” He also thanked the efforts of Ministry of Culture for making this event a grand success and said the teachings of Buddha given 2562 years ago, are relevant even to this day and celebrations of this kind will help take his teachings across the world.

In the end, thanking the Government of India, Ven Dr .Dhammapiya, Secretary General, International Buddhist Confederation (IBC), concluded that “Hatred is a destructive force, it causes destruction and produces nothing but suffering and disharmony that divides and engulfs people into distrust and ill will.

A definite way to peace and harmony is the practice of universal love and compassion. Love and Compassion are positive energy that can elevate human consciousness and becompassionate to all living beings.”

India is home to some sacred Buddha Relics currently housed in various museums. The Archaeological Survey of India (ASI), conducted excavations at Piprahwa from 1971-77, discovered two un-inscribed steatite stone caskets containing 12 relics (from the bigger casket) and 10 sacred relics (from the smaller casket). These are believed to be the sacred relics of the Buddha and are now on long term loan from the ASI to the National Museum, New Delhi. Four of these Holy relics of Buddha excavated from Piprahwa in present day Uttar Pradesh are kept at the Indira Gandhi Indoor Stadium. These Holy Buddha Relic were brought out for the first time in a procession with religious protocol by Ven. Dr. Dhammapiya, Secretary General, International Buddhist Confederation, followed by 15 eminent senior monks and nuns of Theravada and Mahayana tradition, and placed on the special pedestal at the event. The dignitaries offered their respect to the sacred Holy Relics.

A dance theatre carrying the message of Buddhism ‘The Light of Inner Self’ was performed by the Bengal Buddhist Association , in addition to chanting of Buddhist hymns and other cultural performances.