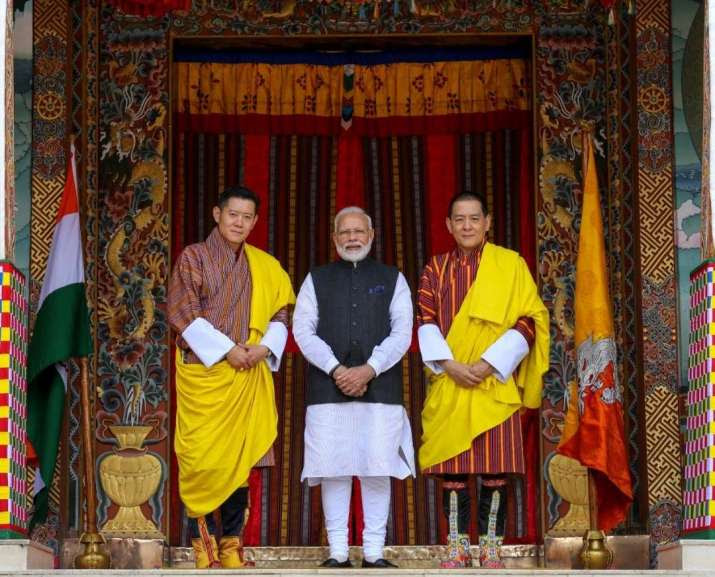 His Majesty the King of Bhutan Jigme Khesar Namgyel Wangchuck, left, and His Majesty the Fourth Druk Gyalpo, right, with Indian Prime Minister Narendra Modi in Tashichho Dzong. From facebook.com
Thimpu  is the capital and largest city of the Kingdom of Bhutan. It is situated in the western central part of Bhutan, and the surrounding valley is one of Bhutan’s dzongkhags, the Thimphu District. The ancient capital city of Punakha was replaced as capital by Thimphu in 1955, and in 1961 Thimphu was declared as the capital of the Kingdom of Bhutan by His Majesty the 3rd Druk Gyalpo Jigme Dorji Wangchuck.  .

Narendra Modi on Sunday concluded a two-day visit to the Buddhist kingdom of Bhutan, his second official visit to the secluded Himalayan kingdom, made at the invitation of Bhutan’s Prime Minister Dr. Lotay Tshering and aimed at strengthening bilateral ties between the two neighbors.

Tshering held wide-ranging talks with Modi seeking to deepen partnerships across several developmental sectors. During the brief tour, 13 programs were covered, 10 memoranda of understanding were signed, and the recently completed 720-megawatt Mangdechhu hydroelectric project was inaugurated, while Modi emphasized the common ties between the people of the two nations and their shared spiritual heritage.

After Modi’s arrival on Saturday, he was granted an audience withe His Majesty the King of Bhutan Jigme Khesar Namgyel Wangchuck in the throneroom of Tashichho Dzong, a Buddhist monastery, fortress, and the traditional seat of the civil government in the capital Thimphu, where the two exchanged views on taking the Bhutan-India partnership forward. Among the new cooperations resulting from the two-day visit were agreements in the fields of aviation, e-commerce, education, energy, information technology, telecommunications, and space research. Modi also announced that a revred 255-year-old statue of Zhabdrung Ngawang Namgyel Rinpoche (1594–1651), the Tibetan lama credited with establishing Bhutan as a nation-state, which has been on loan to Bhutan from India for two years, could extend its stay in the kingdom.

“Today, I have here, received the blessing of the Zhabdrung. I am very pleased to announce that India has agreed to extend the presence of the unique statue in Bhutan by another five year,” Modi said. (Kuensel)

Dr. Tshering responded by observing that it was very auspicious that Bhutan and India could celebrate another bilateral milestone in the spiritual presence of the sacred sculpture of Zhabdrung Rinpoche.

Called on His Majesty the King of Bhutan. We discussed ways to further deepen partnership between India and Bhutan. 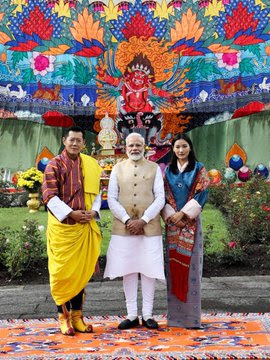 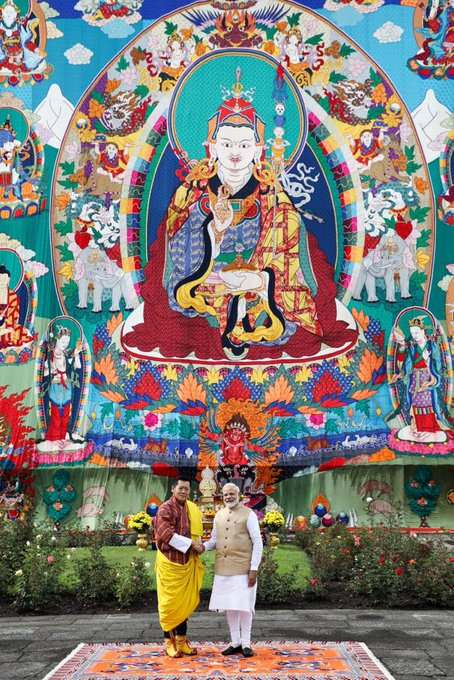 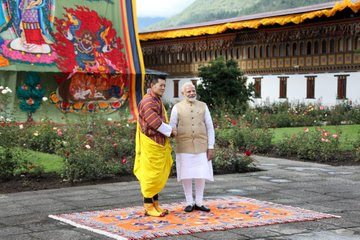 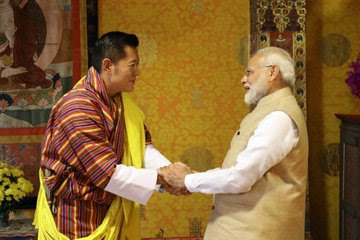 Sandwiched between economic heavy-hitters India and China on the edge of the mighty Himalayan mountain range, the tiny Buddhist Kingdom of Bhutan is perhaps best known for prioritizing “Gross National Happiness” over the shortsighted acquisitiveness of development based solely on economic growth, and for the success of its sustainable approach to environmental stewardship.

Bhutan’s development philosophy of GNH was introduced in the late 1970s by the country’s fourth king, Jigme Singye Wangchuk, drawing inspiration from the kingdom’s traditional Buddhist culture. An alternative to traditional metrics for measuring national development, such as gross national product (GNP) or gross domestic product (GDP), GNH is founded on four underlying principles or pillars: good governance, sustainable socio-economic development, the preservation and promotion of culture, and environmental conservation. While not opposed to material development or economic progress, GNH rejects the pursuit of economic growth as the ultimate good, instead seeking to cultivate a more holistic approach to balanced development and societal well-being, translating cultural and social priorities into developmental goals to create a happier, more equitable society.

Speaking to students at the Royal University of Bhutan, Modi invited more young Bhutanese to study India in traditional areas such as Buddhism as well as newer fields such as space research. During his speech at the university, Modi also praised the beauty, compassion, and simplicity of the people of Bhutan, and complimented the richness of the kingdom’s spiritual heritage and traditions.

“Our history, culture, and spiritual traditions have created unique and deep bonds between our peoples and nations,” Modi observed. “India is fortunate to be the land where Prince Siddhartha became Gautam Buddha, and from where the light of his spiritual message, the light of Buddhism, spread all over the world. Generations of monks, spiritual leaders, scholars, and seekers have burnt that flame bright in Bhutan. They have also nurtured the special bond between India and Bhutan.

“For centuries, education and learning have been central to the ties between India and Bhutan. In ancient times, Buddhist teachers and scholars formed the bridge of learning between our peoples. This is a priceless heritage, which we wish to preserve and promote. Therefore, we welcome more students of Buddhism from Bhutan in institutions such as Nalanda University—a historical global seat of learning and Buddhist traditions, which is revived at the very place where it existed 1,500 years ago.” Modi also paid his respects at the National Memorial Chorten, a revered Buddhist monument erected in honor of the late Third Druk Gyalpo Jigme Dorji Wangchuck, the third king (r. 1952–72), who began the modernization of Bhutan, opening up the country to the outside world and taking the first steps toward democratization.

Bhutan is unique in being the world’s only remaining Vajrayana Buddhist nation. The spiritual tradition is embedded in the very consciousness and culture of this remote land, where it has flourished with an unbroken history that dates back to its introduction from Tibet in the eighth century by the Indian Buddhist master Padmasambhava, also known as Guru Rinpoche.

Most Bhutanese—about 75 per cent of the population of some 735,000 people—identify as Buddhists, according to data for 2010 from the Washington, DC-based Pew Research Center, with Hinduism accounting for the majority of the remainder. Most of Bhutan’s Buddhists follow either the Drukpa Kagyu or the Nyingma school of Vajrayana Buddhism. Indian prime minister Modi at the National Memorial Chorten in Thimphu. From From twitter.comThe culture of Bhutan is fully reflected in the capital city in respect of literature, religion, customs, and national dress code, the monastic practices, music, dance, literature and in the media. Modernity has been blended without sacrificing on the traditional Buddhist ethos.
Share this...