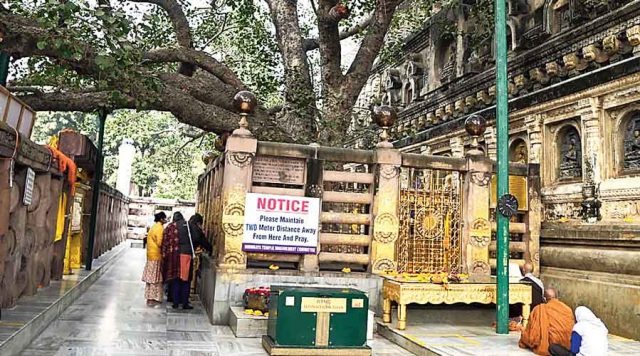 By  —  Shyamal Sinha
A few centuries after the Buddha, a stone platform or throne was established under the Bodhi tree to mark the spot where the Buddha sat in meditation and acts as a second focus of devotion there. In some Buddhist traditions Bodh Gaya itself is referred to simply as the “Diamond Throne” (Sanskrit, vajrasana), indicating the significance of this throne to the identity of this sacred site. Some of this throne remains in-situ, though it has been moved around the site at various times in the past.
Different emperors and kings had down the centuries installed three so-called diamond thrones or enlightenment thrones under the famous Bodhi (peepal) tree 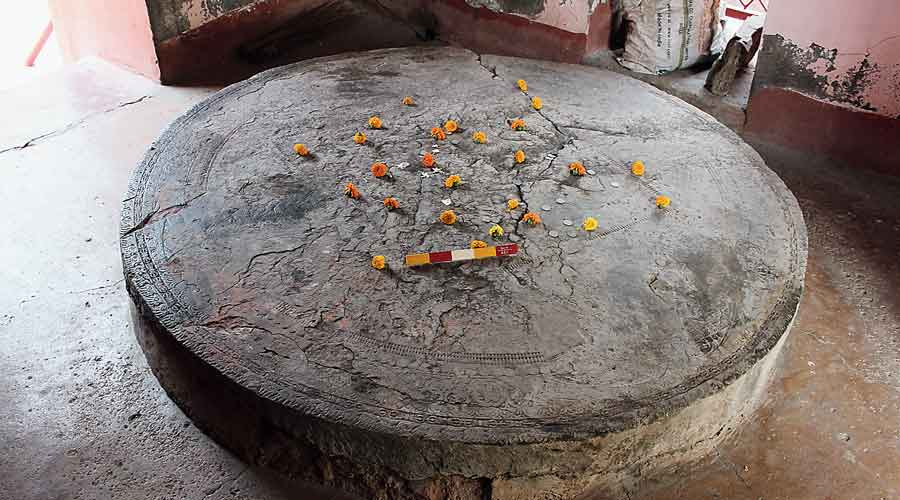 The Kushana-period vajrasana, as claimed by ASI expert Shanker Sharma, at the Vageshwari Devi temple in Bodhgaya.
Telegraph photo

An Archaeological Survey of India expert has claimed to have discovered the two lost vajrasanas or “diamond thrones” of the Buddha in Bodhgaya, one lying broken and unnoticed in the Mahabodhi Temple compound and the other installed in a nearby Hindu shrine.

Different emperors and kings had down the centuries installed three so-called diamond thrones or enlightenment thrones — stone slabs with intricate engravings — under the famous Bodhi (peepal) tree in Bodhgaya to mark the Buddha’s attainment of enlightenment at the spot.

All three were treated as symbolic relics of the Buddha and together formed a focal point for prayers.

Currently, only the first of them — built by Emperor Ashoka around 260 BC — is installed there while the other two have been missing for over a century. The Kushanas are believed to have installed the second throne in the first or second century AD while there’s some dispute over who built the third, which was installed in the seventh century AD. 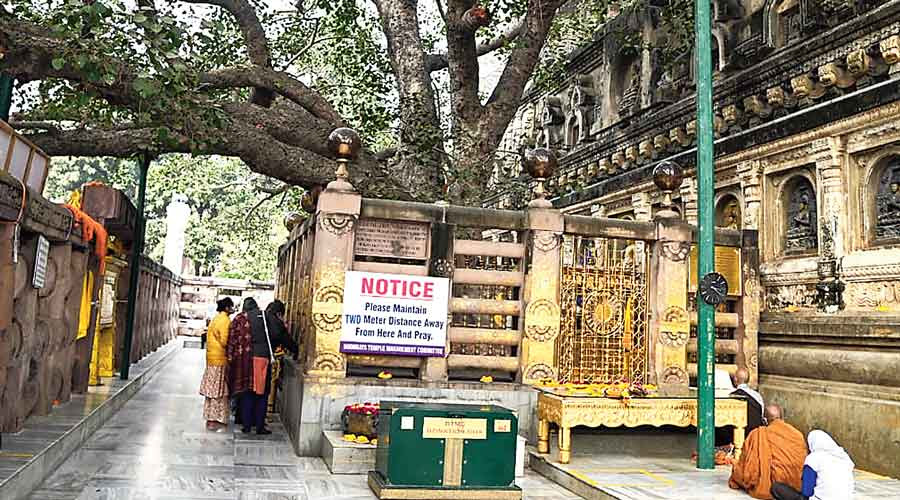 By the time Alexander Cunningham, the first director-general of the ASI, began excavations at the Mahabodhi Temple in 1880-81, all three had gone missing from under the Bodhi tree.

Cunningham found them underground during his excavations and reinstalled the one Ashoka had built under the Bodhi tree. What happened to the other two remained a mystery until Shanker Sharma, ASI assistant superintending archaeologist who is in charge of the archaeological museum at Bodh Gaya, claimed to have found them.

Sharma told The Telegraph he had stumbled on what he believes are the two missing thrones in February this year, but the second wave of the pandemic soon closed the temple and prevented verification by independent experts.

Following the reopening of the Mahabodhi Temple in end-August, Sharma has sent invites to archaeologists and historians specialising in Buddhist matters to come and see the two purported vajrasanas he has found. 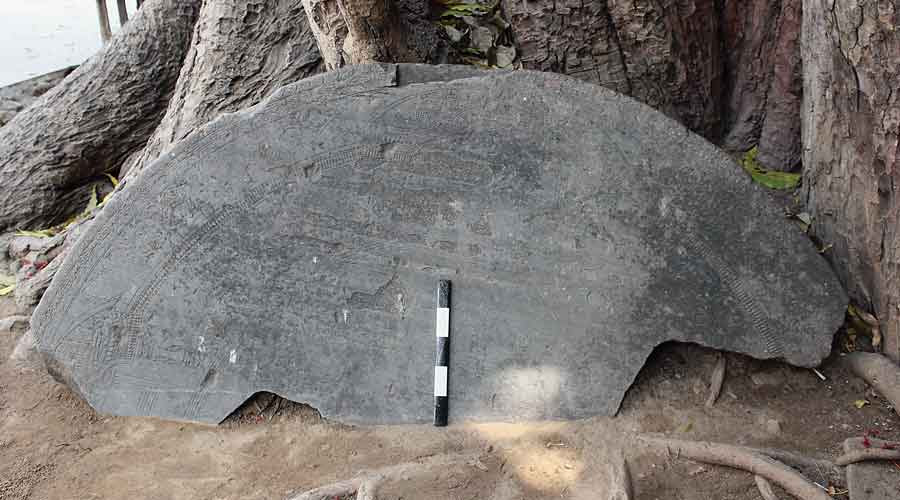 Sharma claims to have found this broken vajrasana from the seventh-century AD under a tree on the Mahabodhi Temple campus.
Telegraph photo

He is also preparing a report for his ASI seniors and will be presenting his findings at the 20th annual conference of the Indian Society for Buddhist Studies, to be held from October 1 to October 3 in Nalanda.

“I was going through Cunningham’s excavation records. While he discovered all three vajrasanas and reinstalled the one that belonged to Ashoka’s time, the other two simply fell off the radar and were forgotten,” Sharma told this newspaper. “This got me thinking about their whereabouts.”

He consulted Cunningham’s excavation records, Buddhist texts and the travelogues of Chinese pilgrims Fa Hien or Faxian (AD 399-414) and Hiuen Tsang or Xuanzang (AD 637) for descriptions of the thrones and started scouting for them in and around the Mahabodhi Temple.

He says he found the Kushan-era throne “at the Vageshwari Devi (Saraswati) temple, located to the east of the Mahabodhi Temple”.

“It’s worshipped by the Hindus and matches the descriptions found in excavation records and travelogues,” Sharma said.

“It was carved out of grey stone and is largely intact with some signs of weathering and possible marks of vandalism. It’s circular, with a 173cm diameter and a thickness of 21cm.”

The third vajrasana too was made of grey stone. Sharma says he found it abandoned under a tree inside the Mahabodhi Temple complex, bearing signs of vandalism and exposed to the forces of nature that have obliterated the intricate designs on it.

The carvings on the second and third thrones included those of lotus petals, other flowers, creepers, vajra (thunderbolt), animals as well as geometrical shapes, dumbbells, concentric garlands, scrolls and pillars. All these have a tradition of being used in Buddhist art and architecture.

designs including diamond shapes. It is 7 feet and 6 inches long, and 4 feet and 10 inches wide.

“They are among the most sacred objects of worship in Buddhism. If they are stolen or damaged, it would be a big loss to the nation,” Sharma said, adding that they should be “immediately moved to safety”.

Mahabodhi Temple head priest Bhikku Chalinda said the Ashoka-built vajrasana predated the shrine and was the centre of attraction for pilgrims.

Asked about the discovery of the two other vajrasanas, Chalinda said: “Archaeologists are saying this. One of them is at a nearby temple, which is not under our authority. The other is under a tree inside our temple compound. We’ll decide in a few days what to do with it.”

He said there was no decision yet on retrieving the other throne from the Hindu temple.

“The discovery of the two vajrasanas is very important. Now that Shanker Sharma had brought them to light, there will be discussions and further research on them,” Anant Singh, a professor at the School of Buddhist Studies, Nalanda University, said.