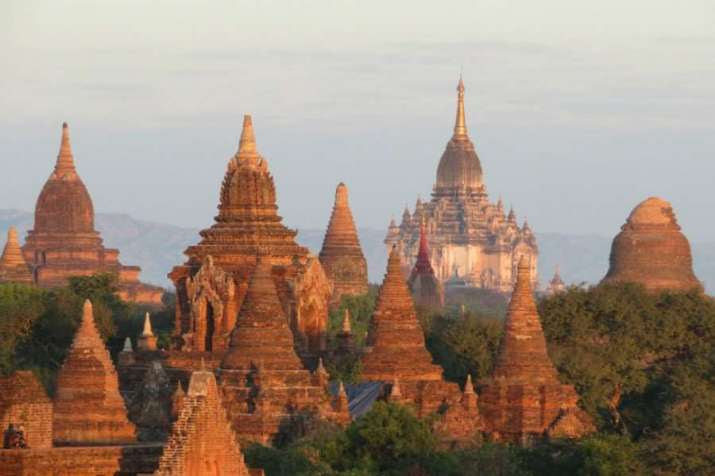 Pagodas in Bagan. Photo from fathomaway.com
“Bagan is living heritage, having endured all forms of challenges for more than a thousand years,” said Myanmar diplomat Kyaw Zeya, speaking on behalf of the Myanmar delegation at the Baku meeting.

“Today we are celebrating the joyous moment of the successful inscription of Bagan in the World Heritage List. Afterwards we will continue our efforts on conservation and management of Bagan so that this treasured heritage will remain for another thousand years.”

The Archaeological Survey of India (ASI) has started restoring five pagodas in the ancient city of Bagan, a UNESCO World Heritage site in Myanmar. The five Buddhist monuments were damaged during a devastating earthquake in 2016.

According to the deputy director of the Archaeology and National Museum Department in Bagan, U Seo Soe Lin, the ASI will carry out emergency maintenance work, including structural maintenance and checking the integrity of paintings and concrete floral patterns. “The restoration would take years,” said Lin. “Emergency maintenance for integrity will be done this year, and the rest will be done step by step, after doing research on the structures.” (Myanmar Times)

Founded in 1861, the ASI is an Indian government agency under the Ministry of Culture that is responsible for archaeological research and the conservation and protection of culture heritage in India.

The agreement to carry out restoration at Bagan was jointly signed during a state visit to India from 26–29 February by Myanmar’s president, U Win Myint. During the interactions, India welcomed the inclusion of Bagan on the list of UNESCO World Heritage Sites in June last year.

Myamar president U Win Myint and Indian prime minister Shri Narendra Modi during the exchange of agreements between India and Myanmar in New Delhi on 27 February 2020. From newsin.asia

India and Myanmar also welcomed the commencement of the first phase of the ASI’s work which will oversee the restoration and conservation of 12 pagodas under a project to restore a total of 92 earthquake-damaged pagodas in Bagan. In 2010, both countries signed an agreement to work on the structural conservation and chemical preservation of Ananda Temple in Bagan, which is dated to 1105.

Bagan is located in a low-lying area beside the Ayeyarwady (Irrawaddy) River, the country’s longest and most important commercial waterway, and represents 42 square kilometers of historical and cultural wealth. From the 9th–13th centuries, the city was the capital of the kingdom of Pagan, the first kingdom to unify the regions that would later constitute modern Myanmar. Between the 11th and 13th centuries, more than 10,000 Buddhist temples and stupas were constructed in the area. Today, in excess of 3,000 Buddhist temples, monasteries, stupas, and monuments remain, giving Bagan the highest density of Buddhist architecture anywhere in the world. It is also one of Myanmar’s most popular tourist attractions and rapid urban development means that UNESCO protection is very necessary.

According to the UNESCO: “The authenticity of Bagan is demonstrated by the landscape of Buddhist monuments of diverse sizes, scales, materials, designs, and antiquity; and the rich and continuing religious and cultural traditions.” However, UNESCO also states that the authenticity of some monuments “has been impaired by inappropriate interventions from the 1970s and 1990s, and by the extensive damages that resulted from earthquakes.” (Outlook Traveller) In 2016, 389 pagodas and ancient buildings in Bagan were damaged by a 6.8 magnitude earthquake. Four years of work conducted by local and foreign experts restored 365 pagodas to UNESCO standards. There are also plans for UNESCO experts to work alongside Bagan’s archaeological team to improve their conservation and restoration skills, as well as to establish a training course in mural conservation.