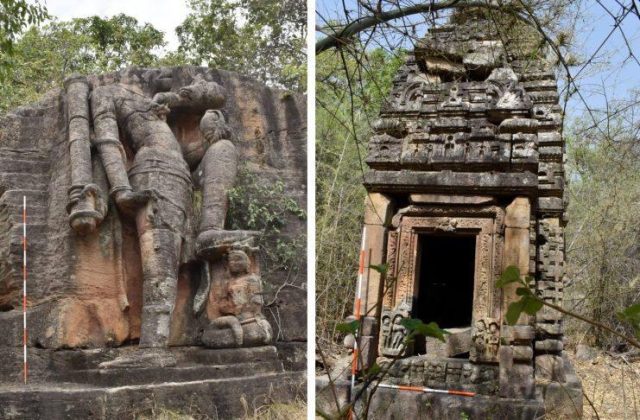 The team of Archaeological Survey of India have discovered another gem from India’s ground. In a remarkable finding, 26 temples, 26 caves, 2 monasteries, 2 votive stupas, 24 inscriptions, 46 sculptures, other scattered remains and 19 water structure have been recorded from Bandhavgarh Forest Reserve, Madhya Pradesh.

The Archaeological Survey of India (ASI) has discovered a number of Buddhist structures, murals, and caves in the Bandhavgarh Forest Reserve, in the Umaria District of Madhya Pradesh. The archaeological sites, which had not been explored since 1938, are believed to date to a number of historical periods, including the second to fifth centuries CE and in the 14th and 15th centuries.

Included among the inscriptions were murals bearing names of cities including Mathura and Kaushambi. A votive stupa and a Buddhist pillar fragment were also found. The pillar fragment incorporates a miniature stupa carving. These items have been dated to the 2nd–3rd centuries CE, according to the ASI. Two new Shaiva mathas from the Kalachuri period (9th–11th centuries CE) were documented, as well as coins belonging to Mughal-era and Sharqi dynasty of the Jaunpur Sultanate (1394–1413).

The Bandhavgarh Forest Reserve, about 500 kilometers west of Madhya Pradesh’s capital, Bhopal, is home to protected tigers and much of it is closed to the public. The ASI team covered some 170 square kilometers from late May to June. Also found in the area were sculptures depicting Hindu gods, including Vishnu.

Superintending archaeologist of the Jabalpur Circle, S. K. Bajpai, led the team. He offered further details about the discovery, saying: “This is the first time ASI has explored Bandhavgah since the 1938 exploration by archaeologist N. P. Chakravarti. Many structures there were documented.” Bajpai continued: “We reported and documented more structures, including ancient caves, temples, Buddhist remains, mathas, sculptures, water bodies, mural inscriptions in old scripts like Brahmi and Nagari.” (Firstpost)

Bajpai also noted that other agencies had explored the area but had not turned up such momentous discoveries. During his work in the forest this year, he shared that he had “encountered a tiger and elephants,” but that “caves gave us shelter.” (Firstpost)

Included in the inscriptions were the names of old cities such as Mathura and Kaushambi, located in Uttar Pradesh, found in ancient inscriptions the archaeologists documented, Bajpai said.

“Names of these cities located far away from Bandhavgarh suggest that there were trading ties and people from other cities may have donated something, but again, it is a matter of conjecture,” said another senior ASI official. (Firstpost)

ASI officials noted that 35 temples had been documented in the area, nine from previous expeditions and 26 in this most recent exploration.  Among the temples and caves, evidence of Mahayana Buddhism emerged in some of the artifacts. The ASI plans two future explorations to cover yet more of the tiger reserve.

Buddhism, founded by the historical Buddha who likely lived c. 480–400 BCE according to contemporary scholarship, flourished in India for centuries after his death. The religion began to decline after the seventh century CE, due largely to resurgences of Hinduism. It was virtually wiped out from the continent in the period of Muslim rule, which began in the 12th and 13th centuries. The late 19th and early 20th centuries saw a revival of Buddhism in India, growing in particular with the establishment of temples from Buddhists across Asia and the world in Bodh Gaya, and from the movement of Dalit conversions sparked by Dr. B. R. Ambedkar (1891–1956). Today, Buddhism constitutes a tiny minority of Indians, accounting for only 0.7 per cent of the population according to a 2011 census.

Bandhavgarh Tiger Reserve in Madhya Pradesh is home to magnificent big cats. It is located about 500 km from state capital Bhopal. It is located in the eastern Satpura hill range of Umaria and Katni districts. Mythologically the name “ Bandhavgarh” means Bandhav or brother and garh meaning fort.

The Tiger Reserve is known for the healthy population of tigers and variety of herbivores. This area is unique from the point of biodiversity, as it comprises hills, valley, rivers, marshes and meadows to give rise to diverse vegetation. Apart from tiger, as many as 34 species of mammals have been listed and nearly 260 species of birds and 70 species of butterfly.