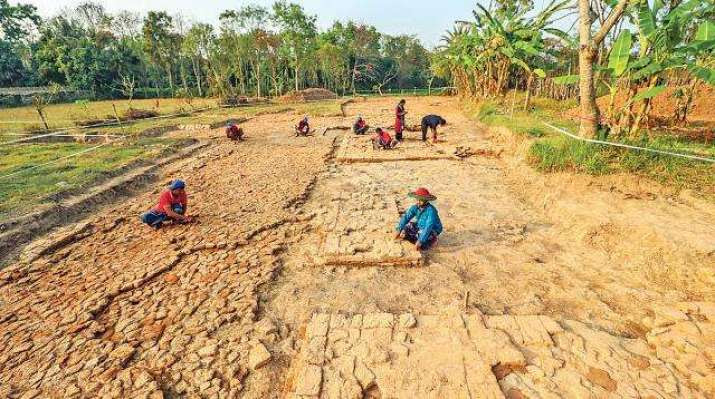 Archaeologists have unearthed a Buddhist site dated to the ninth to mid-11th century in Gaurighona Union, Bangladesh. From dhakatribune.com
Buddha once in his life came to this region of East Bengal to spread his teachings and he was successful in converting the local people to Buddhism. Buddhism is now the third largest religion in Bangladesh with about 2% of population adhering to Theravada Buddhism.
Over 65% of the Buddhist population is concentrated in the Chittagong Hill Tracts region, where it is the predominant faith of the Chakma, Marma, Tanchangya, other Jumma people and the Barua. The remaining 35% are from the Bengali Buddhist community. Buddhist communities are present in the urban centers of Bangladesh, particularly Chittagong and Dhaka.Buddhism did not gain much support until the reign of Asoka when Buddhism gained a toehold. The Pala Empire that controlled the Indian subcontinent spread many Buddhist ideologies in modern Bangladesh and built many monasteries such as the Mahasthangarh and the Somapura Mahavihara. During the Pala Dynasty, a famous teacher named Atisha was born in the city of Bikrampur and spread Mahayana Buddhism.

A team of archaeologists from Bangladesh’s Archaeology Department of Khulna and Barisal has unearthed a 1,200-year-old Buddhist monastic complex. The archaeologists began excavations at Dalijhara Dhibi of Gaurighona Union in the Kheshbpur Sub-district of Jessore District on 22 January, and have discovered two Buddhist temples and courtyards that are adjacent to 18 chambers within the complex. Experts have suggested that the structure dates to between the ninth and mid-11th centuries.

Afroza Khan Mita, regional director of the Archaeology Department of Khulna District and supervisor of the excavation, confirmed the discovery and noted that it was the first time a structure of this kind had been discovered in southwestern Bangladesh, and even in the southern region of West Bengal.

“The ancient architecture has some unique features that have not been seen anywhere in Bangladesh before,” Nag added. “I think once the whole architecture is excavated, it will be a significant addition to Bangladesh’s archaeological history. (Dhaka Tribune)

Archaeologists have noted that some of the exceptional features found in the ruins of the monastery complex differ from other Buddhist sites in Bangladesh and in Bihar, Odisha, and West Bengal in India. Researchers and experts are now trying to find out whether comparable features can be found at any other Buddhist ruins in South Asia.

“After excavating the site, we have found fragments of ornamented bricks, terra-cotta plaques, and clay pots,” said Urmila Hasnat, a research assistant at the Department of Archaeology of Khulna and Barisal. “The fragments of terra-cotta bricks and plaques have engravings of lotus flowers and geometric shapes.” (Dhaka Tribune)

“Apart from that, we have also found stucco made from lime and sand, which also has various floral and geometric engravings,” added Hasnat. “A special type of clay pot has also been recovered here, which is only found in Buddhist monasteries from the seventh and 11th centuries. (Dhaka Tribune)

According to the Prothom Alo, a daily Bengali newspaper in Bangladesh, the site was once a mango grove. In 1988, a violent storm saw most of the trees in the garden felled. Subsequently, a gardener took the initiative of planting banana trees. While preparing the soil for cultivation, a deep brick barrier was discovered. The find become a significant event among local residents, although outside of the area, the incident was not very well known.

In November last year, some 30 years after that initial discovery, the garden’s owner Rizia Sultana and her husband Mostafa Moral decided to plant mango trees again. This time, digging deeper into the land, a huge red brick structure was found. After the news was disseminated in December, Afroza Khan Mita and AKM Saifur Rahman, assistant director of the regional Archaeological Department, came to the area and explained that they needed to excavate the area. Rizia and Mostafa granted permission, and digging began in January this year. After three months of excavation, the full significance of the discovery was revealed.

The brick tower is actually part of a medieval Buddhist monastic complex. The style of the Buddhist architecture is not only a unique discovery for Bangladesh, but it has not been found anywhere in the coastal areas of West Bengal. The excavation has continued throughout March, with plans to halt work during the rainy season and then resume soon afterward.