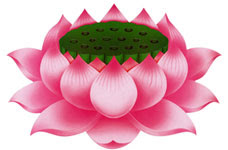 The lotus is one of Buddhism’s most recognizable symbols of enlightenment and is important in many Buddhist traditions.

According to legend, everywhere the baby Buddha stepped, a lotus flower bloomed. The famed Lotus Sutra is one of the most important texts of Mahayana Buddhism and is the foundation of the Pure Land schools.

Because the lotus grows in muddy water, it symbolizes the purity of enlightened mind arising amidst the suffering of samsara. It also represents nonattachment, as it is rooted in mud (attachment and desire) but its flowers blossom on long stalks unsullied by the mud below.

The famous Tibetan mantra OM MANI PADME HUM, meaning “OM the Jewel in the Lotus HUM,” invokes Chenrezig (Avalokiteshvara), the bodhisattva of compassion. In this case, the lotus represents wisdom and the jewel symbolizes skillful means.

Lotuses are symbols of purity and ‘spontaneous’ generation and hence symbolize divine birth. According to the Lalitavistara, ‘the spirit of the best of men is spotless, like the new lotus in the [muddy] water which does not adhere to it’, and, according to esoteric Buddhism, the heart of the beings is like an unopened lotus: when the virtues of the Buddha develop therein the lotus blossoms. This is why the Buddha sits on a lotus in bloom. In Tantrism, it is the symbol of the feminine principle. The lotuses are usually differentiated by their colour and grouping, in three or five flowers, which may or may not be combined with leaves.

White lotus
This symbolizes Bodhi, the state of total mental purity and spiritual perfection, and the pacification of our nature. It generally has eight petals corresponding to the Noble Eightfold Path of the Good Law. It is the lotus found at the heart of the Garbhadhatu Mandala, being the womb or embryo of the world. It is characteristic of the esoteric sects, and the lotus of the Buddhas.

This is the symbol of the victory of the spirit over the senses, of intelligence and wisdom, of knowledge. It is always represented as a partially opened bud, and (unlike the red lotus) its centre is never seen. It is the lotus of Manjusri, and also one of the attributes of Prajnaparamita, the embodiment of the ‘perfection of wisdom’.

This is the supreme lotus, generally reserved for the highest deity, sometimes confused with the white lotus it is the lotus of the historical Buddha.

This is the mystic lotus, represented only in images belonging to a few esoteric sects. The flowers may be in full bloom and reveal their heart, or in a bud. They may be supported by a simple stem, a triple stem (symbolizing the three divisions of Garbhadhatu: Vairocana, lotus and vajra), or a quintuple stem (symbolizing the Five Knowledges of Vajradhatu). The eight petals represent the Noble Eightfold Path and the eight principal acolyte deities of the central deity on the mandalas. The flowers may also be depicted presented in a cup or on a tray, as a symbol of homage.

The lotus flower is one of the Ashtamangala of Buddhism, representative of creation and cosmic renewal and “primordial purity” and shares in the chakra and mandala symbolism of the Dharmacakra.

This has also taken root in Chinese cultures with a famous statement made by the 11th century Confucian scholar Zhou Dunyi: “I love the lotus because while growing from mud, it is unstained.”

The padma is held to be a flower with a thousand petals and is therefore associated with the Sahasrara and indeed all the chakra. The padma appears as an endemic dais upon which deities rest and indeed upon which Hindu iconography is founded.

Padma is an aquatic plant that plays a central role in Indian religions such as Hinduism, Buddhism, Sikhism, and Jainism.

In Buddhist symbolism the lotus is symbolic of purity of the body, speech, and mind as while rooted in the mud, its flowers blossom on long stalks as if floating above the muddy waters of attachment and desire. It is also symbolic of detachment as drops of water easily slide off its petals.