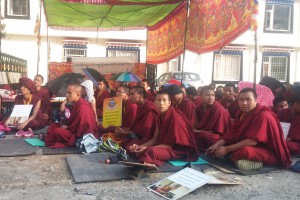 Followers of Jonang tradition sit in protest outside the Tibetan Parliament-in-exile in Dharamshala, India, on 18 September 2015. They are demanding recognition of Janang as one of the sects of Tibetan Buddhism.

The followers of the Jonang tradition are demanding that they be recognised as a separate sect similar to the four other sects of Tibetan Buddhism, namely, Nyingma, Kagyu, Sakya and Gelug, and the native Tibetan Bon religion.

With the official recognition, the four sects enjoy various privileges, such as two representatives each in the Tibetan Parliament-in-exile, invitations to political and religious meetings, and membership in the Tibetan Buddhist scholars committee, which is under the Department of Religion and Culture of Central Tibetan Administration (CTA).

For years the members of Jonang tradition have been requesting the CTA and the exile Parliament to accept Jonang as a separate sect and provide them with equal rights and privileges.

So far this has not been done, and hence the protest, which later on became more serious with nine members starting a hunger strike, and with one member reportedly attempting self-immolation to protest the failure by the CTA and the exile Parliament to fulfill their demands.

The CTA has agreed to make four of the seven changes: extend invitations to leaders of Jonang to political and to religious meetings, teach about Jonang in schools, and receive equal seats in the Tibetan Buddhist scholars committee.