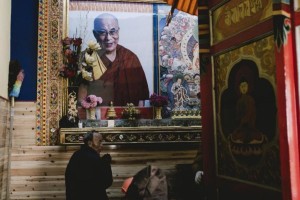 Adrak’s last words before Chinese police dragged him away were “May the Dalai Lama live 10,000 years”.

The 20-year-old Tibetan monk was carrying the spiritual leader’s portrait as he walked down the main street outside his monastery, also calling for freedom for Tibet.

The picture fell to the ground as police set upon him, and when several onlookers joined his calls, they too were beaten and taken away, according to witnesses and former monks currently in exile.

But the protest did not play out like so many previous ones — Adrak did not self-immolate, or even try to, as monks in the pasts have often done.

The burnings have slowed to a trickle, replaced by less incendiary solo demonstrations after what monks say is a campaign of intimidation by the government, mainly targeting family members and friends of those who killed themselves.

Nothing has been heard of Adrak or three fellow monks since they mounted four such actions in as many days.

Their Kirti monastery in Aba has been at the centre of the 143 known cases of Tibetans setting themselves on fire, most of them dying, to oppose China’s policies in the region and call for the return of the Dalai Lama, a Nobel Peace laureate.

About a third of the total happened in Aba county, in the southwestern province of Sichuan. Of those, more than half were current or former monks and nuns.

“I can choose to destroy this body for my ideas, but I cannot make a decision like that for others,” said a 24-year-old monk under the golden roof of the temple as a breeze blew wind chimes in the background. “Many monks do not want to endanger their families.”

The town’s main road running near the temple is colloquially known as “Martyrs’ Street”, but there have been only seven self-immolations so far this year according to rights groups.

At least 98 Tibetans have been detained, imprisoned or have disappeared because of alleged connections with someone who set themselves on fire, according to advocacy group the International Campaign for Tibet, which says the number may be much higher.

One man was condemned to death in connection with his wife’s self-immolation after authorities accused him of murdering her.

Another monk was given a suspended death sentence, according to media reports, a sentence normally commuted to life in prison, for “inciting” others to burn themselves.

Observers say the model of collective punishment is not new, rather a throwback to Communist and imperial eras.

“You create security by making other people responsible for one person’s actions,” said Robert Barnett, director of the Modern Tibetan Studies Program at Columbia University.

“This threat is increasingly being used throughout China’s security operations in Tibetan areas,” he added.

Chinese authorities keep Aba under tight control –- Internet service to the county has been cut since Adrak and his fellow monks’ actions in September -– and visits by international media are extremely rare, with police checkpoints on roads leading to the town.

Armed police no longer stand guard outside the Kirti monastery’s main entrance to intimidating the roughly 3,000 monks within, as was the norm before.

And the cinderblock walls hastily erected at the height of the self-immolations to ensure only one entrance and exit point have been partially dismantled.

But a 35-metre- (100-feet-) tall metal pole remains in the central courtyard, looming over every other building in the complex and festooned with floodlights and four rotating cameras, giving authorities a 360 degree view of the monks’ outdoor lives.

“We no longer need to set ourselves on fire to protest, now we can just protest and the government will make us disappear as if we died,” said a 21-year-old monk.

“We only want equality, but we are treated like criminals,” he added, bundled against the cold in burgundy robes as his friend nodded in sombre agreement.

The monks have been forced to attend hours of political reeducation classes, but Beijing’s efforts to promote “ethnic unity” struggle to succeed.

“We are not from China,” an 11-year-old monk declared in English. “We are from Tibet.”

Beijing says its troops “peacefully liberated” Tibet in 1951 and claims it has since brought economic development to a previously backward region where serfs were exploited.

The government has accused the Dalai Lama of secretly backing violence in the region while “feigning beneficence to gain international sympathy and support”.

The self-immolations “decreasing numbers mean that their cause is a lost hope and they will not achieve their cause.”

Local officials did not respond to telephoned and faxed requests for comment from AFP about the September protests and the detained monks’ whereabouts.

The Dalai Lama has stayed neutral on the self-immolations, describing the burnings as acts of desperation that he is powerless to stop, and reluctant to condemn them to avoid offending the families of the dead.

The spiritual leader fled into exile after a failed uprising in 1959, and Tibetans and overseas campaign groups say that religious and cultural freedoms are restricted, while natural resources exploitation has primarily benefited members of China’s Han majority, who have immigrated to the region en masse.

“While the Chinese government has increased the intensity of its oppression of Tibetans in Tibet, it seems that it has not been possible for them to prevent or stop Tibetans from protesting peacefully,” Kirti Rinpoche, the abbot of the monastery who lives in exile in India, told AFP.

With fewer uniformed police on the streets, the government’s efforts to pacify the town seem to be making progress.

But monks and locals say a climate of fear persists in Aba, and that there is heavy presence of plain-clothes police. Experts say those who carry out solo demonstrations are usually sentenced to between two and four years in prison.

But dissent has not been completely crushed. Five locals in Aba told AFP said some sort of protest occurs in the town “at least once every month”.

“There is so much pressure living here, no one can breathe,” said Tseda, a shop owner in Aba who said he supported the monks’ actions.

“I feel as if I have died and was reincarnated in hell.”