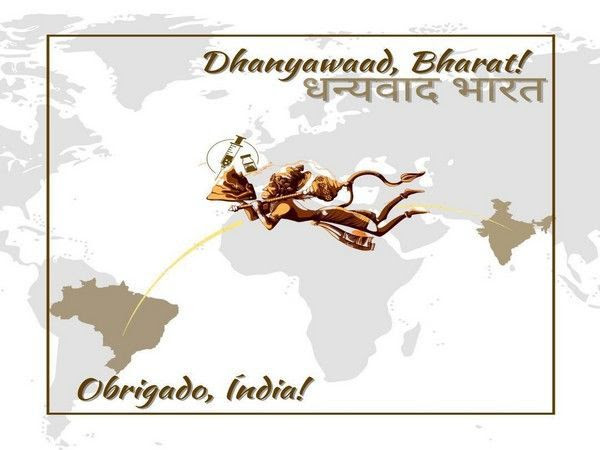 Brazil President Jair Bolsonaro on Friday thanked Prime Minister Narendra Modi by saying “dhanyavaad” for supplying the “sanjeevni booti” (the vaccine) against the coronavirus to the South American country, which has reported the second-highest death toll from the Covid-19 disease in the world.

In a tweet on Friday, the Brazilian President said that it was an honour to have India as a “great partner” against the “global obstacle.”

“Thank you for assisting us with the vaccines exports from India to Brazil. Dhanyavaad!,” he added.

Brazil, has the second highest number of coronavirus cases in the world next only to the United States.

India is one of the world’s biggest drugmakers, and an increasing number of countries have already approached it for procuring the coronavirus vaccines.

India has already rolled out a massive coronavirus vaccination drive under which two vaccines, Covishield and Covaxin, are being administered to frontline health workers across the country.

While Oxford-AstraZeneca’s Covishield is being manufactured by the Serum Institute, and Covaxin is being produced by Bharat Biotech.

India had earlier supplied hydroxychloroquine, Remdesivir and paracetamol tablets, as well as diagnostic kits, ventilators, masks, gloves and other medical supplies to a large number of countries to help them deal with the pandemic.

According to Hinduism Sanjeevani is a magical herb which has the power to cure serious nervous system problems. It was believed that medicines prepared from this herb could revive in any situations where death is almost certain. The herb is mentioned in the Ramayana when Ravana‘s son Indrajit (Meghnad) hurls a powerful weapon at Lakshmana. Lakshmana is badly wounded and is nearly killed by Indrajita. Hanuman was called upon to fetch this herb from the mount Dronagiri (Mahodaya) or Gandhamardhan hills, far to the north of the Vindhyas on the slopes of the Himalayas. The mountain of herbs is identified as the Valley of Flowers near Badri in Uttarakhand on the slopes of the Himalayas. It is sometimes called Gandhamardan, and at other times Dronagiri. Upon reaching Dronagiri Parvata or Gandhamardan, Hanuman could not identify the herb and lifted the whole mountain and brought it to the battlefield .

In his tweet, Bolsonaro shared a depiction of Lord Hanuman carrying a mountain with vaccines from India to Brazil. The illustration is inspired from the tale in the Ramayana where Hanuman carries an entire mountain to deliver the Sanjeevani herb, to save the life Lakshmana, the brother of Lord Rama, when he was injured in a battle.

“Dhanyawad, Bharat,” the image read (written in the Latin and Hindi text).

Prime Minister Modi also replied to the Brazilian President saying that it was an honour to be a trusted partner during the pandemic adding that the two countries will continue to strengthen cooperation on healthcare.

“The honour is ours, President @jairbolsonaro to be a trusted partner of Brazil in fighting the Covid-19 pandemic together. We will continue to strengthen our cooperation on healthcare,” Prime Minister wrote in a tweet dated Saturday.

“Trust the Pharmacy of the World. Made in India vaccines arrive in Brazil,” Jaishankar tweeted.

India dispatched two million doses of Covishield vaccines to Brazil on Friday. Covishield has been developed by AstraZeneca and Oxford University and is being manufactured by Serum Institute of India.

In the last few days, India has supplied COVID-19 vaccines, being manufactured in the country, to neighbouring countries including Bhutan, Maldives, Nepal, Myanmar and Bangladesh.

Large consignments of Covishield vaccine doses were flown in a special Indian aircraft to Seychelles, Mauritius and Myanmar on Friday. Contractual supplies are also being undertaken to Saudi Arabia, South Africa, Morocco, Bangladesh and Myanmar.