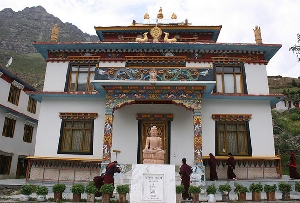 Guru Ghantal : Guru Padmasambhava himself was the founder of this monastery, located on a hill in the district of Lahaul and Spiti, Himachal Pradesh. Over 800 years old and made of wood, the monastery hosts a towering image of the Bodhisattva Avalokiteshvara, and idols of Guru Padmasambhava along with other lamas. Strangely enough, inside the innermost chamber there sits an idol of the Hindu goddess Kali, which has lent weight to the claim that this was the site of a temple before the monastery came into being. 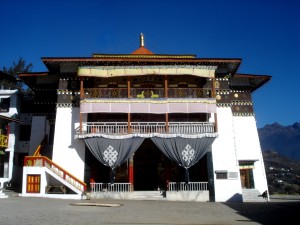 Located above the Tawang town near Bhutan border at a height of 3500 metres above the sea level, Tawang Monastery is the largest Tibetan Buddhist Monastery in the world and also popular by the name of Galden Namgey Lhatse. It is recommended to visit the monastery during early hours in order to catch sight of dancing monks. The monastery represents Mahayana Buddhism. 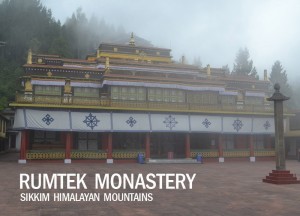 Of the 200 monasteries located in Sikkim, Rumtek Monastery located at the peak of Gangtok is the largest and hence the most popular. The Monastery attracts tourists for its ancient origin (since 9th century), magnificent and colourful landscapes, gushing waterfalls and untouched river. Given the conflict surrounding this monastery, tourists will notice that there is high security at this place. Apart from visiting the monastery, visitors should pay a visit to the Lingdum Gompa and Rumtek Gompa. One can also participate in the masked dance festival held just before the Tibetan New Year.

Thiksey Monastery, located in the Indus Valley, serves two-fold purpose for any visitor – one is to worship Lord Buddha and the other one is to enjoy the remarkable hill-covering location and fabulous look of this place. The place also has a museum which has preserved ancient relics and art during the Buddhist period. Maitreya Temple is most famous amongst tourists at this monastery on account if its 49 feet tall statue of Lord Buddha. 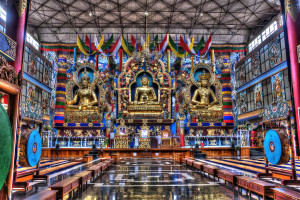 If you are in the South of India and fancy visiting a monastery, Nyingmapa near Coorg, is probably the only monastery to turn to. The Monastery is most famous for its Tibetan settlement in this region, the Golden Temple and the Namdroling Monastery. The innumerable gold statues of Buddha in the temple and the prayer hall and the countless domes provide exotic experience to the tourists. 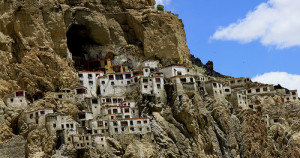 Trekking at a monastery can be real fun. Phuktal Monastery, located at the mouth of a grand cave, has its origin dating back to the 16th The Monastery hosts several prayer rooms alongside a main temple, teaching facilities, a library, apartments and kitchen room. Sacred spring and the cave is the most prominent feature of this place. 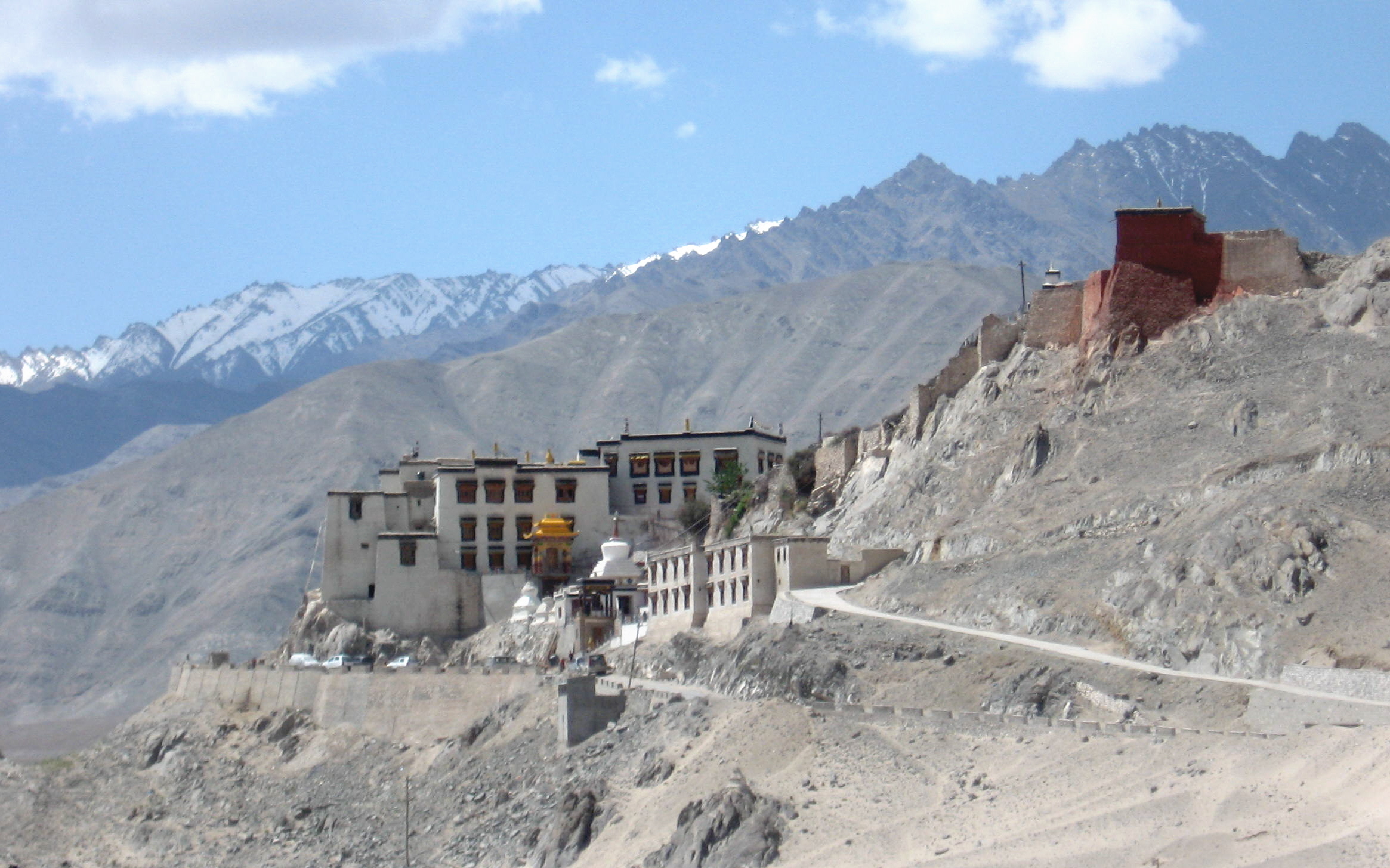 TrSpituk Monastery : located on a hill near the Indus river, this monastery is believed to have been given its name by Rinchen Zangpo, the word ‘Spituk’ means exemplary. Pictures of protective deities adorn the entrance walls on both sides. The main assembly hall has five rows of low seating intended for the monks and a high throne at the far end reserved for the Dalai Lama. Behind the high throne are figures of the Buddha’s various manifestations. The entire left panel of the assembly features an image of Tara, the companion of Avalokiteshvara, and the right panel features images of previous heads of the monastery. The assembly leads to a courtyard which connects one to another, smaller hall, with the centre of attention being the massive statue of Buddha Shakyamuni flanked on either side by the statues of Guru Padmasambhava and the Goddess Tara. Diagonally across from this stands a temple known as the Dolma Lokhang, which boasts 21 magnificent statues of Tara, representative of her various manifestations. One should note that minimal lighting inside the complex makes flashlights essential for visitors.

Located 50 km. to the south-east of Ladakh, Hemis Monastery was re-established in 1652 and is famous for the spiritual re-treat and masked dance held at the Hemis festival. While in this region, you should not miss visiting the Hemis National Park. You will be awestruck with huge collection of ancient statues and age-old artifacts at the Hemis Gompa.

Alchi Monastery also known as Alchi Choskhor, this is one of the oldest monasteries in the Ladakh region, and also the only one to be built on flat ground. It was founded by Rinchen Zangpo, one of the most influential translators of the 10th century and greatly responsible for the spread of Buddhist ideas further east. However the oldest artefacts found here can be traced back to no earlier than the mid 12th century. This monastery is particularly rich in Buddhist art and architecture. One of the two temples houses a 14.5 ft tall figure of the Maitreya Buddha, flanked by a white Avalokiteshvara to the left and the figure of Manjushri to the right. Murals depicting the Buddha can be found all over the monastery, through the entrances (of which there are three), in the walls of the assembly hall, in the two temples, and more, and provide a distinctive history of later embellishments added after the construction of the original structure, as can be observed from the varying styles found in the same site. 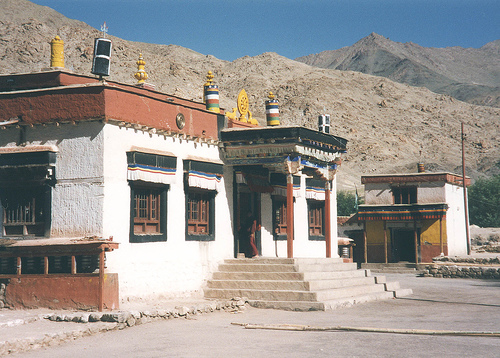 Takthok Monastery : approximately 50 km away from Leh, this monastery is the only one of its kind in all of Ladakh or Kashmir. It belongs to a sect of Buddhism known as the “Old Order”, or locally, the Nying ma pa. The name Takthok literally translated, means Rock Roof, and this may be owing to the cave chapel found inside, and a cave which is also believed to have served as a meditative spot for Guru Padmasambhava. In front of this cave chapel one finds statues of him and Avalokiteshvara. A temple a little higher up, connected to the courtyard by a flight of steps, houses the well preserved 108 volumes of Buddhist teachings. There are two statues of the Buddha along with his two primary disciples, and four more statues of the Buddha can be found in another temple placed right across from this one. The assembly hall of this monastery is particularly noteworthy, for along with rows of low seating for monks and a throne for the Dalai Lama , it also boasts three magnificent statues of the Maitreya Buddha, two statues of Padmasambhava, one of his own self, and one of a future manifestation, Dorje Takposal. In addition to these one finds brilliantly executed wall paintings of Padmasambhava, Buddha Shakyamuni, and guardian divinities. There are two annual festivals celebrated here, the Tak Thok Tse Chu, and the Tak Thok Manchong, between the 9th and 11th day of the ninth Tibetan month, and the 20th and 29th of the sixth Tibetan month respectively. 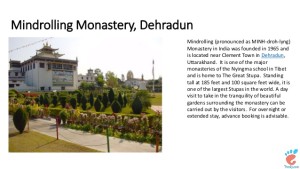 At the foothills of Himalayas, the Mindrolling Monastery in Dehradun is well-known to be a Buddhist institution and a learning centre. It belongs to the Nyingma School and was restored in 1976 in India. Buddha Temple and Rajaji National Park are popular destinations here. The 107 feet tall Great Stupa of Lord Buddha is highly recognised for its architectural magnificence. 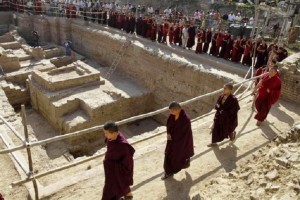 The recent excavations have brought to light a Buddhist Monastery belonging to the 2nd-7th century AD, within the fortified area of Vadnagar. The monastery had two votive stupas and an open central count yard around which initially nine cells were constructed. The arrangement of cells around the central courtyard creates a swastika-like pattern. 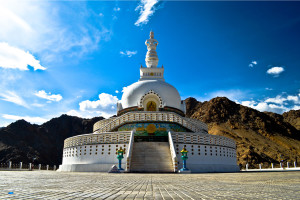 Shanti Stupa is situated on a hilltop in Chanspa, Leh district, Ladakh, in the north Indian state of Jammu and Kashmir. Shanti Stupa as know Buddhist white-domed stupa. It was built in 1991 by Japanese Buddhist Bhikshu Gyomyo Nakamura .The Shanti Stupa holds the relics of the Buddha at its base, enshrined by the 14th Dalai Lama himself. Shanti stupa has provides beautiful and panoramic view of the surrounding landscape. This has become a primary reason for Shanti Stupa to become a popular tourist attraction, apart from its religious significance.
The Shanti Stupa was built to promote world peace and prosperity and to commemorate 2500 years of Buddhism. It is considered a symbol of the ties between the people of Japan and Ladakh.

Situated at a height of 4,267 metres (13,999 ft), the stupa is located 5 kilometres (3.1 mi) from Leh – the former capital of Ladakh – on a steep hill facing the Leh Palace. The stupa can be reached by a drivable road or on foot using a series of 500 steep steps to the hilltop

The stupa is open for tourists between 5:00 a.m. and 9:00 p.m. Sunrise and sunset are considered to provide the best views from Shanti Stupa.